Star Trek: Deep Space Nine: "In the Hands of the Prophets" 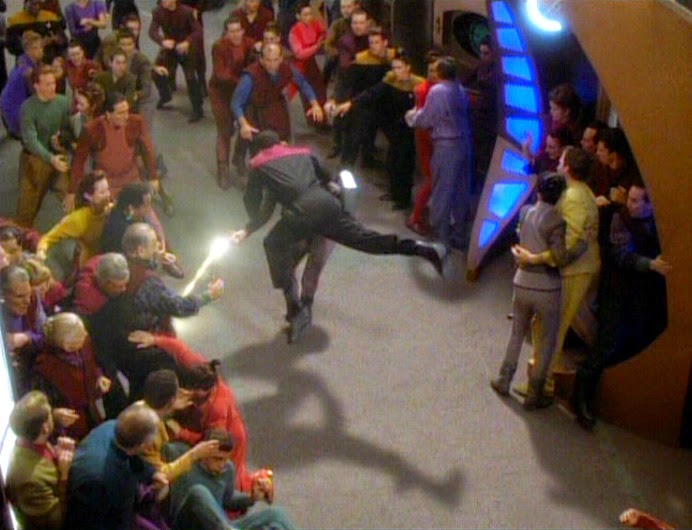 Deep Space Nine ends its freshman year with an episode that lacks the emotional intensity of its predecessor, but still manages to present a provocative take on the balance between science and religion in the classroom. This episode is more than 20 years old yet it still hits hut social buttons for America today: the debate over evolution versus intelligent design continues to be held in many parts of the USA, making "In the Hands of the Prophets" still unfortunately relevant.

It's an interesting debate to hold in Deep Space Nine, because the standard rules for this kind of Star Trek story - science versus religion - don't necessarily apply. This is a series that straddles an impressive but uncomfortable line. There is a scientific explanation for the wormhole and the aliens inside it, but there's still a religion based around them. Major Kira still devoutly believes that religion, as do most of her Bajoran co-workers. Sisko remains, albeit unwillingly, a significant spiritual figure within it. He may be a Starfleet officer first and foremost, but like it or not he is also the Emissary of the Prophets. The tension there generates incredible drama, and with this episode Robert Hewitt Wolfe draws it out brilliantly. There's a beautiful little scene between Sisko and his son Jake, with the father gently urging the son to show more respect for other people's beliefs. It's impressive that Wolfe can skirt the line so deftly: there's no doubting the scientific explanation for the Prophets, but Sisko makes it eminently clear that science or not they're still the Prophets.

What helps the episode along in terms of drama is its introduction of Bajoran religious politics. With Kai Opaka vacating her role earlier in the season, it's election season for the various high-ranking clerics (known as Vedeks) for the leadership. One of the front-runners is Vedek Wynn, who is a fascinating character. She's clearly demonstrated to be ruthless, cunning, deceitful and even murderous, but she's performed by Louise Fletcher in a manner that makes it equally clear she believes she is the hero. She is a classic "villain you love to hate", and makes a strong addition to the series' supporting cast.

Slightly less impressive is Philip Anglim as the rival Vedek Bariel. He's a progressive within his church, but whether it's the dialogue he's given or Anglim's understated performance he simply doesn't make the same kind of impact. The struggle between Bariel and Wynn is introduced here, but doesn't get resolved until well into the second season. I actually like this kind of season finale more than an overt cliffhanger. It resolves the first season very well, but looks forward to the future at the same time.

Some of the other elements don't work quite as well, notably the introduction of a 'lone gunman' sleeper agent sent to perform an assassination during the episode's climax. It's directed by David Livingston in a highly stereotypical matter, with everything slowing down, Sisko leaping across the Promenade screaming "Noooo!!!" and so on. The series is better than this.

All told, however, this is a strong and intelligent season finale, and definitely gets my tick of approval. That leaves the season with 12 good episodes out of total of 19 (including one double-length pilot) and a quality ratio of 63%.
Posted by Grant at 6:05 PM