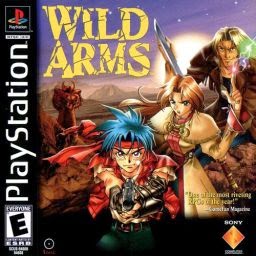 By the time Wild Arms was released in Australia in 1998, it was already somewhat out of date. Its SNES-era charms, while sufficient to get it fairly positive reviews, left it a little bit redundant in a post-Final Fantasy VII market. I didn't care. I still don't. Wild Arms is a superb Japanese role-playing game that's rich in design and personality, and wonderfully enjoyable to play.

It lures you in at first, perhaps under false pretences, with a beautiful anime opening complete with beautiful orchestral score and hand-drawn animation (produced by Madhouse, for those familiar with that particular production studio). The game itself is all two-dimensional sprites running around two-dimensional maps, although the menu-based battle sequences are rendered in a rather primitive polygon-based fashion. The character design is one of the game's strengths, though, as is its balance between three protagonists.

You begin the game with a choice of three characters. Once you've picked one, you play through a prologue for an hour or so until you are suddenly asked to pick one of the other two. Then the third. It's only after you've encountered and been properly introduced to all three protagonists that they meet each other and the game begins in earnest. Since the game takes its time developing the character I find them a lot more engaging than the average JRPG heroes.

Beyond that, it's simply a neatly made by-the-numbers role-playing game. It does everything you'd expect it to without disappointing you at any point along the road. It was a commercial success in Japan (where it had the benefit of being released before Final Fantasy VII), and led to a string of sequels on the PSX and PS2, not to mention spin-off manga and anime. The franchise has gone quiet in recent years - the last original game was released for the Sony PSP in 2008 - but there's always hope for a revival.

This is one of those games I've come back to every few years to replay. It's been a rewarding experience every time. I'm not quite certain why it works as well as it does for me; it's a game that simply feels right. It has a charm that makes me smile every time I see that opening animation start up again.
Posted by Grant at 5:22 PM