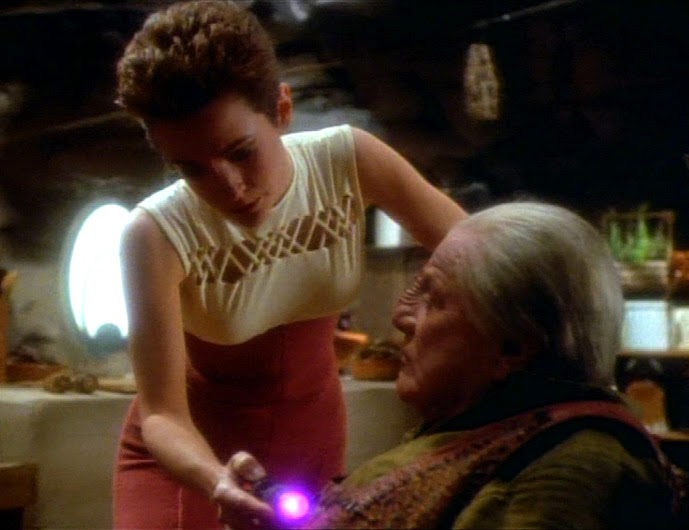 Thankfully this is a much, much better episode. One of Bajor's moons is to be repurposed to provide energy for the entire planet, but the explosive gases that will spill out once the core is mined will kill anything living on it. All of the residents farming on the moon have been relocated bar one, so Major Kira beams down to persuade him to leave. Back on the station Jack and Nog try their hand at private enterprise.

The episode's main plot is anchored in a very strong performance by Brian Keith as Mullibok, an elderly Bajoran who escaped the Cardassian occupation and built a farmhouse and now refuses to leave it. If he stays he'll die, or the Bajoran government will be forced to abandon plans to generate power for millions of people. He could be forcibly removed, but this prospect horrifies Kira so much that she risks her own commission to stay on his farm and try to persuade him to leave.

Nana Visitor is great in this episode. I think she's an underrated actor and plays a deeply underrated character. Major Kira suffers somewhat in the first season. She doesn't get as much material as she probably deserves, and she begins the series as a rather thinly drawn and hasty replacement for what was supposed to be The Next Generation's Ro Laren (Michelle Forbes declined the offer to play the character permanently). This episode makes up for that a lot, serving up a beautifully performed two-hander that explores Kira's values and personality. As I mentioned above, Brian Keith is exceptionally good in this episode. I've read that the original intention was to make his character less sympathetic, but I'm glad they didn't go down that route because the episode wouldn't work half as well. It's conclusion is perfectly pitched and timed, and utterly heartbreaking.

It's such a tough situation for Kira: she's spent her whole life fighting the Cardassians, resisting in every tiny way she can find the authorities who were ruling over her. Now she is the one in authority, and Mullibok's resistance needs to be stopped.

The Jake and Nog subplot is a nicely played comedy that continues to craft the close friendship between the two teenagers. Once again it pushes the Ferengi away from being unpleasant charicatures and gives their mercantile culture some more appreciation and respect. It's fluff, but it's entertaining fluff - and it does balance the more serious elements of the main plot.