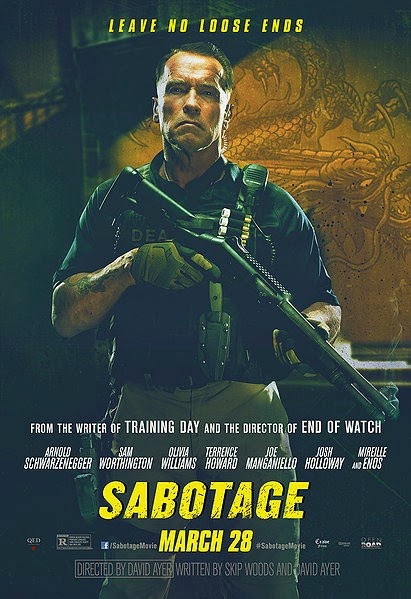 Something very unfortunate has happened to the career of Arnold Schwarzenegger. A decade ago he took a break from his highly successful Hollywood career to become Governor of California. That side-job done (if being head if the world's 10th largest economy can be called a side-job) he returned to full-time acting with The Last Stand, a funny action comedy that promptly flopped at the box office. He followed that up with Escape Plan, a 1980s action throwback with Sylvester Stallone that arguably did the job of The Expendables better than that film ever did. It too flopped, in this case so heavily that it didn't even receive a mainstream cinema release in Australia. Australians didn't get his latest film in cinemas either, although it was advertised for a while. This film, Sabotage, is a much darker and more cynical picture than The Last Stand or Escape Plan, but it's about as good.

I honestly don't understand why audiences have abandoned Arnold Schwarzenegger. These films are as good or better than other action films at the multiplex. Schwarzenegger's own performances are the best they have ever been. He's simply been abandoned; yesterday's news, basically this generation's Charles Bronson. He doesn't deserve this. This film doesn't deserve this. Sabotage is bleak, violent and oftentimes close to actively unlikeable, but it is absolutely worth your time. Here's why.

Schwarzenegger plays Breacher, the leader of a DEA strike team accused of stealing ten million dollars in drug carter money. The film doesn't make a secret over whether or not the accusation has merit - we see Breacher's team steal the cash in the first first scene - and instead focuses on the repercussions as the team are murdered one by one in retaliation for the theft.

They're not a particularly loveable bunch. They're violent, antisocial criminals masquerading as police officers. Of the team it's Schwarzenegger who's arguably the most likeable - a decorated career officer who keeps the disparate band together and on mission. He teams up with police investigator Caroline Brentwood (Olivia Williams) to solve the murders. It's Brentwood who's the film's most appealing character: driven, professional and acerbic. The interplay between her and Breacher is one of the film's best elements.

It's relentlessly gory. I actually don't have a problem with violent cinema like this: real-world murderous violence is brutal, frightening and sickening to the core, and in many ways it's more responsible to show things as they would actually be. That said, the graphic violence of Sabotage simply doesn't stop and at times does get more than a little overwhelming.

Sabotage is not a perfect film, but it's certainly a fast-paced and entertaining thriller and was worth a cinema release a lot more than films that did have that benefit. I'm not sure what Schwarzenegger should do now. He's got a Terminator sequel coming, which strikes me as the last film he should be doing at this age. With his performances at his all-time best, and his films regularly entertaining, and no one watching them - what's an actor to do?
Posted by Grant at 7:45 AM