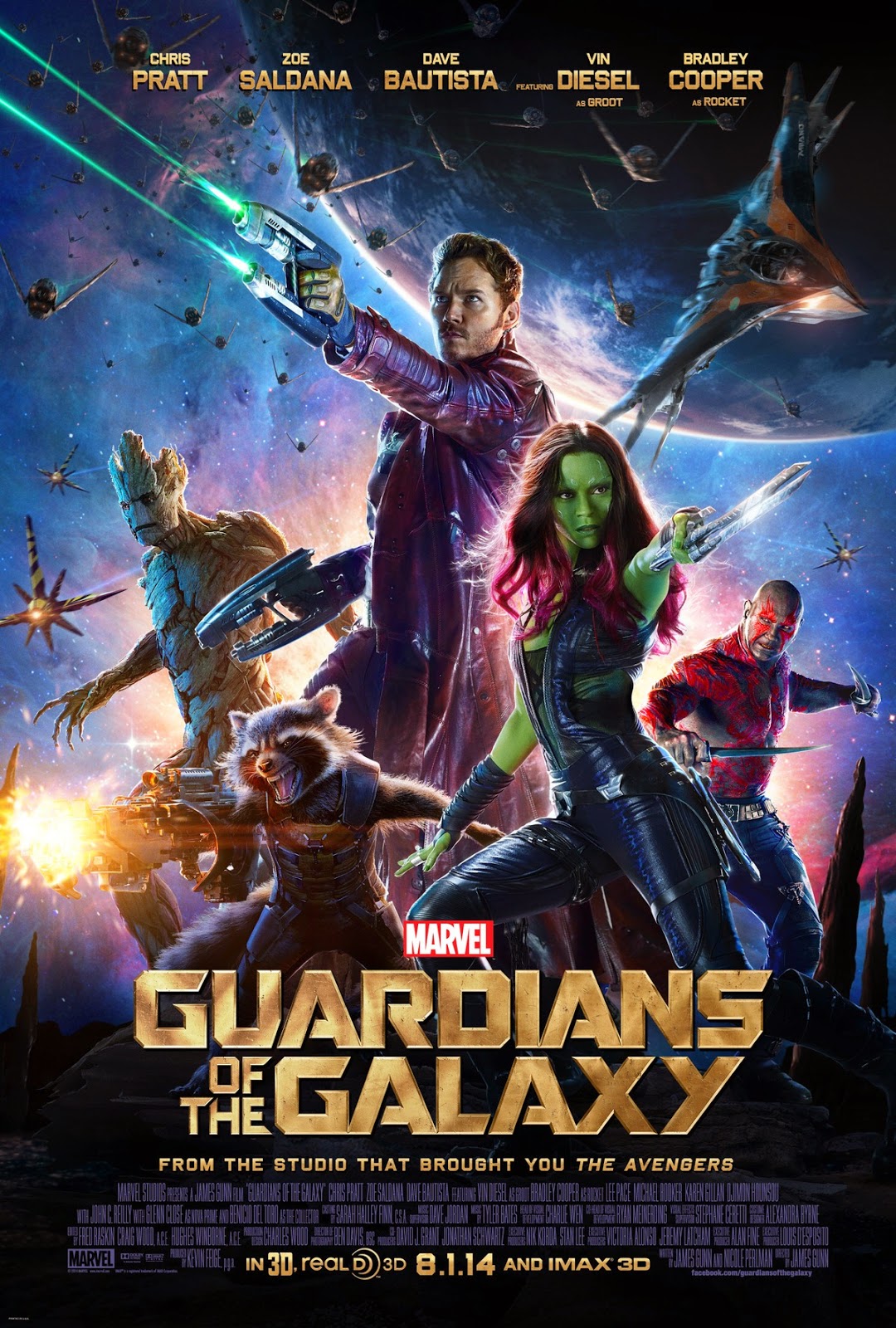 It's always a challenge coming to a hit movie late in the game. Everybody else seems to have already seen it, and so it's impossible - unless you're some kind of hermit - to go into the film with open expectations. This is pretty much my situation with James Gunn's Guardians of the Galaxy, which opened in cinemas while I was attending the Melbourne International Film Festival, and which has already grossed more than half a billion dollars worldwide. Every person I know who has seen it bar one has liked it. It is currently scoring 76% on Metacritic and 92% on Rotten Tomatoes. I've heard it compared to Star Wars, and in a few cases cited as considerably better than Star Wars. So when you go into a film as I now have, well conditioned into expecting a masterpiece, it's actually quite difficult to take a step back and appreciate Guardians of the Galaxy on its own merits.

Nonetheless I shall do my best. Guardians of the Galaxy is a wonderfully entertaining science fiction adventure film with enormous helpings of humour and energy, but also quite a few flaws. None of them are critical but they are sufficient to leave me feeling like a bit of a party pooper, waving my hands around in front of a crowd swept up by hyperbole, saying tediously un-fun things like 'steady on' and 'it's not that good.'

Is it the best movie of all time? Definitely not. Is it better than Star Wars? Well, certainly the prequels but I wouldn't go further than that myself. The best of the Marvel Studios features? I wouldn't say so , but I also wouldn't strenuously argue the point if it was your personal favourite. All in all, Guardians of the Galaxy has to make do with merely being brilliant.
The film follows Peter Quill, a human abducted from Earth as a child and now roaming the galaxy as a thief. When he tries to steal the wrong artefact he gets wrapped up in a battle to save the galaxy from an insane Kree zealot bent on the genocide of billions of people. On his way he picks up a group of allies, including a green-skinned assassin, an incredibly angry and naive tattooed homicidal maniac, a machine-gun toting raccoon and a walking tree.

Plot-wise the film joins the dots reasonably enough and, a slightly scrappy first act aside, moves along at an engaging and breezy pace. It has a lot of strong action, spaceships flying around shooting each other and hilariously odd-looking aliens. The Star Wars comparisons are inevitable, since there hasn't really been a film since the Star Wars trilogy that has really pushed a dense, colourful alien environment like this. Those that have - Star Trek, Stargate, John Carter - have strenuously kept one foot on Earth with a cast predominantly made up of humans. It's refreshing to see another sci-fi franchise take a few chances with this sort of knowingly ridiculous setting.

And what chances it takes. It's now become a familiar running joke that, while DC/Warner Bros vacillate over whether or not to take the risk on a Wonder Woman movie, Marvel Studios went ahead with a $200m action flick starring Rocket Raccoon and Groot. They're both great; in fact all five members of the Guardians are great. Chris Pratt pretty firmly stakes his claim as Hollywood's hot new movie star, Zoe Saldana cements her reputation for being pretty much the only woman in town when it comes to big budget sci-fi movies, and Dave Bautista shows a level of comic timing I honestly never knew he had. Bradley Cooper is solid as the voice of Rocket and Vin Diesel-

Well this is the thing about Vin Diesel. He gets a lot of stick for his gravelly voice and oftentimes limited performance skill, but this is the second time he's played the voice of an alien with a highly limited vocabulary (see The Iron Giant) and in both cases he does an outstanding amount with so little material. Of course in both cases half of the praise must go to the talented animators who brought the Giant and Groot to life, but that other half? All Diesel.

The characters are what make Guardians work. Everything around them is serviceable without being exceptional, but the characters - and the performances - are so appealing that I really didn't care that much. It's a film that gets better as you watch it. To be honest the second and third acts are probably as roughly plotted as the first, but once the banter kicks in it's difficult to mind all that much.

Sadly much of the supporting cast are wasted (Lee Pace, Djimon Hounsou, Glenn Close, John. C. Reilly) or, to be blunt, not very good (Karen Gillan, Benicio Del Toro). Again, however, the lead characters pull us over any deficiencies pretty well.

I think the bottom line is that characters are what make the Marvel films sing. While some of the films have been outstanding, others have been - when you really start analysing the narratives - pretty mediocre. We don't care though, because we're not watching these films for the plots and - I think critically - we're not watching them for the visual effects either. This is all about the characters. Marvel gets that, that's why they always succeed, and that's why I wound up adoring Guardians of the Galaxy.
Posted by Grant at 7:31 AM