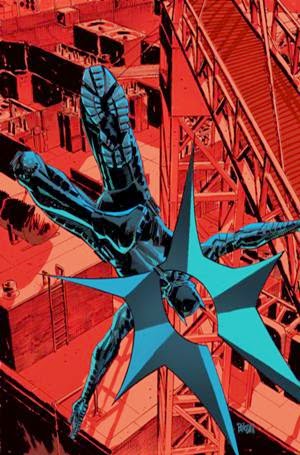 I come not to praise Batwing, but to bury it. It was a book that I honestly expected to be cancelled within eight months, and instead it last three whole years. It probably needed to be cancelled after less than two, to be honest, but for some reason DC refused to let go of the property until the bitter, poorly selling, underwhelming end.

I remain a big fan of the original Batwing, African police officer turned vigilante David Zavimbe, who received a super-powered suit from Bruce Wayne and fought crime, war and corruption in the dangerous world of west and central Africa. I liked the intention behind Batwing in those early days. I liked that there was a monthly comic from DC set in Africa with an African lead, more often than not fighting African supervillains. It felt like a positive step for diversity.

When sales struggled, DC had Jimmy Palmiotti and Justin Gray rework the title with a new setting - Gotham City - and a new lead - MMA champion Luke Fox, son of Waynecorp COO Lucius Fox. So basically they took something distinctive and progressive and turned it into a Batman clone only with an Iron Man-style suit and an angry, unlikeable man at its centre. I never warmed to Luke Fox. I never warmed to the Gotham setting (how many vigilantes does one city need?). While I love much of their superhero work, I did not warm to Palmiotti and Gray's work on this title.

I'm assuming from this final issue (okay, second-to-last - I believe there's a Futures End one-shot shipping next month) that DC didn't give Gray and Palmiotti much notice, since it doesn't really wrap anything up. It just kind of stops in an awkward fashion. The bulk of the issue is quite depressing: Luke's family is broken, save for his ridiculously intelligent and verbose six year-old sister (terrible writing), he's angry and moody and is ready to quit superheroics forever. Then in the final page he saves a family of four and a final panel narration lets us know that he's happy now and is going to keep being a superhero. Ok. Whatever. Out of nowhere, and not remotely well characterised.

The beauty of DC is that they never throw characters out. They inevitably come back: sometimes repurposed, often reimagined. David Zavimbe won't be gone forever, and I can't wait to see another writer pick him up and push him forward. Luke Fox? I kind of hope we don't see him, or his Batwing alter ego, for a long time. (1/5)

Under the cut: reviews of Action Comics, Aquaman and the Others, Batman Eternal, Black Widow, Detective Comics, Justice League 3000, Miles Morales: The Ultimate Spider-Man, The Punisher, She-Hulk, Usagi Yojimbo and The Woods.

The mega-crossover "Doomed" continues, and while I'm only been buying the Action Comics instalments and thus one part in four of the whole story, I have to praise writer Greg Pak for never confusing me once. Every issue has allowed me to catch up rapidly, and it's been quite entertaining seeing just how far the story has jumped each month when I come back to it. This is one of those enormous story arcs that the Superman books were famous for in the early 1990s: multiple villains, huge supporting casts, big ideas, mass destruction, and so on. Did it all make sense? No. Did it entertain me? Absolutely. (4/5)

In a rather sneaky fashion DC sneak in two instalments of the story in the same week thanks to the aforementioned annual and this regular monthly issue. I adore how this storyline has just stacked villains on top of each other - it's a story about Doomsday, then the Cyborg Superman shows up, then it turns out it's a ruse to distract from the arrival of Brainiac, but now Mongul is free. Add in Lex Luthor on the sidelines and it's a Superman villain free-for-all, as if Pak is taking story suggestions from an excitable six year-old - and I love that about it. (4/5)

Aquaman and the Others #5

This issue ends the first story arc for Aquaman and the Others, and it's probably the last issue I'll be picking up. It's had five issues to pick up, do interesting things and excite its readership, but instead it's just served up very generic superhero fare. My most damning indictment: I could not tell you offhand the names of all the members of the Others. Medina and Martinez's artwork is competent but non-distinctive. Basically this is the safest, by-the-numbers, middle-of-the-road superhero comic you could make, and these days that simply isn't enough. (2/5)

Red Hood, Batgirl and Batwoman keep investigating in South America - to be honest I've kind of lost track as to what they're precisely doing there. Meanwhile Batman and Jason Bard head into Gotham's sewers for an encounter with Killer Croc. The Batman half works a lot better than the Batgirl half, which has dragged for a few issues and has completely lost my attention. I'm also not sure where we're up to with Stephanie Brown, or with Jim Corrigan and Batwing in Arkham. This book is sliding off the table and into a dozen confusing pieces on the floor. It needs more focus than this if it's going to work: one of the things that made 52 such a welcome weekly comic was its tight focus and structure. It's feeling like Batman Eternal has neither. (2/5)

Black Widow's latest mission takes her to a deserted container ship on the open ocean, where she runs into the masked mercenary Crossbones and his team - as well as Frank Castle, the Punisher. This is a fast, sharp little action sequence that on first inspection is a little on the ordinary side. It improves enormously, however, if you also pick up The Punisher #9 at the same time. This is a clever little conceit by Edmondson which I enjoyed immensely. Phil Noto's artwork is, as always, exceptional. I'm particularly impressed that he's managed to provide the artwork for nine issues in a row. Work this good usually can't be sustained on a monthly basis. (3/5)

"Icarus" comes to a violent conclusion. It's been a reasonable story arc without getting exceptional, but it leaves Manapul and Buccelatto with a good grounding on which to develop future issues. I particularly like how they've grabbed hold of Lt Harvey Bullock and given his personality a bit more nuance and depth. He's always had a heap of potential but has suffered from being treated like a cliche. The big drawcard for this arc has been Manapul's artwork: I loved it on The Flash, and he's successfully darkened the palette here to make it suit Batman just as well. (3/5)

This is a pretty neat issue, essentially splitting the narrative into two and providing two interconnected 10 page stories rather than a single 20 page one. The first focuses on Batman, Superman and the team escaping from the Five. The second focuses on the resurrected (and regendered) Flash making that escape possible. I am really enjoying the hell out of this book. I'm particularly liking how, against their best intentions, the personalities of the original Justice League are slowly coming to the fore as time goes on. Superman 3000 began this comic as an arrogant, self-interested bastard, but even here he can't help himself from behaving in a manner of which Kal-El would be proud. (4/5)

Oh boy does this comic move slowly. Oftentimes I don't mind: Bendis has an exceptional gift for characterisation and dialogue, and Marquez's artwork perfectly captures the emotions of the book's characters. On the other hand there are issues like this, which don't really push the plot forward any more effectively than a single page could in the hands of a more economical writer. Miles is a great character, but some times this book really feels like poor value for money. I want Bendis to get to the point more often. I want things to happen. (2/5)

Frank Castle, aka the Punisher, is a prisoner of the masked mercenary Crossbones and his team as they arrive on a deserted container ship to plant some bombs and destroy criminal evidence. When Frank escapes his captors, he unexpectedly stumbles upon Natasha Romanov, aka Black Widow. There's a lot of fun to be had in reading essentially the same short story from the perspective of two different characters. Edmondson uses internal monologues in both this issue and Black Widow #9, which allows the reader to get inside the head of each protagonist and see how they differ. This isn't a must-buy by any stretch, but this loose crossover is a hell of a lot of fun. (3/5)

The mysteriously truncated blue file arc does not return in this issue. What we do get is a one-off mightily enjoyable story in which She-Hulk, Hellcat and Ant-Man shrink down to 3cm in height to track down and rescue a runaway scientist who's miniaturisation experiments may have explosive consequences. This is basically the book for Hawkeye fans getting frustrated at that book's glacial release schedule: it's got quirky retro artwork, it does a lot of knowing done-in-one storylines, and it stars appealing characters. What's not to love? (4/5)

As part of the 30th anniversary celebrations for rabbit samurai Usagi Yojimbo, Stan Sakai presents an all-new six-part series set 20 years into Usagi's future - and with a science fiction twist. This first issue is pretty much exactly what you'd expect from Sakai: anthropomorphic animals in feudal Japan, a battle, samurai riding around shouting on horseback, excellent artwork, beautiful dialogue, and so on. The man is like a clockwork automaton of quality. The final page promises quite a different story going forward, but this is by no means Usagi's first encounter with sci-fi. I remember seeing him guest star on the Teenage Mutant Ninja Turtles cartoon some decades ago. (4/5)

A lot of plot developments occur in this issue, both within the school and in the jungle outside. The book is now moving along on three fronts: there's the Lord of the Flies-style collapse of order within the school, there's a group of students getting hunted down in the jungle, and there's a group exploring the mysterious Aztec pyramid nearby. My main concerns about this book remain - it's highly derivative, and there isn't anything presented here that hasn't been seen many times before - but Tynion is re-using the old tropes in an engaging fashion, and Michael Dialynas' artwork suits the story well. (3/5)