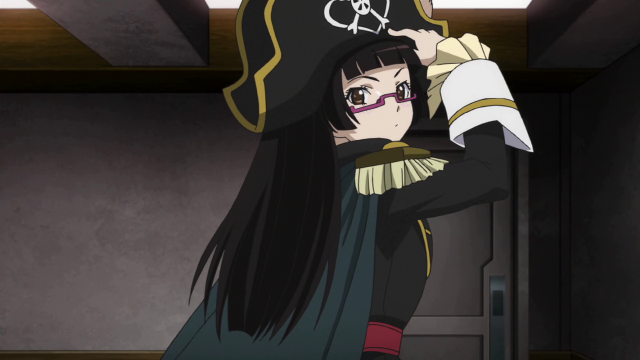 I didn't like my last episode of Bodacious Space Pirates, because I wanted spaceships and explosions and they gave me slow-moving plot developments and characters running in circles. I'm pleased to report that this episode does feature both spaceships and explosions, so naturally I found it much more entertaining. It's by no means a knock-out episode, but there was enough here to keep me entertained and to keep the plot moving along - two things the last episode definitely lacked.

The Bentenmaru is off into a space storm, getting buffeted like nobody's business in the search for the phantom ghost ship. When it is intercepted by the Serenity fleet, Marika orders the charge into battle - even though Serenity's own Princess Gruier is onboard the Bentenmaru.

My favourite part of the episode is actually a brief subplot featuring Chiaki pretending to be Marika, with the pirate ship Barbaroosa masquerading as the Bentenmaru and thus giving it sufficient cover to head off to the space storm without tipping off the authorities. Chiaki visibly has too much fun as a space pirate, which of course is against her every emo-girl goth instinct. The brevity of these scenes only make them funnier.

Over on the Bentenmaru, it's nice to see Marika take such a firm hand in commanding her ship. It's even funnier to then see her sent to her cabin, because captain or otherwise she's still a minor and only legally permitted to work a certain number of hours each day. When the brief conflict with the Serenity fleet occurs, it's nicely played out and cleverly won.

There's also some nice little elements of science fiction going on around the margins, particularly Coorie's hacking into an array of sensor buoys deposited into the storm by the Serenity search parties many years previously. I like the idea that space piracy involves as much computer hacking as it does gun-blazing ship-to-ship combat. It's an element that's run right through the series so far, and works really well.

Hopefully next episode will see the Bentenmaru finally discover the ghost ship, and for this plotline to reach a badly needed conclusion. This is a much better episode than the last, but I can still feel the series momentum staggering. Still and all, seven good episodes out of ten gives us a series quality ratio of 70%.
Posted by Grant at 10:29 AM