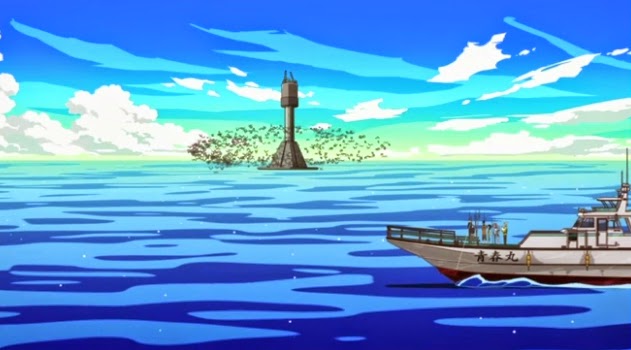 With his grandmother about to be released from hospital, Yuki wants to surprise her with fresh tuna for his coming-home party. That means learning how to fish for tuna, and a secret trip to a forbidden part of the ocean - Akema, an artificial reef built out in the middle of nowhere.

For the bulk of this episode it seems like Tsuritama has slipped into a sort of comfortable formula: each episode Yuki will learn a little bit more about sea fishing, and progress to fishing for a slightly more difficult kind of fish. He will become a little more confident, and open up more to his eccentric friends. Then, during this episode's climax, we suddenly make an unexpected right turn and- what kind of an anime are we watching again?

It's not that I didn't know Haru was an alien. He insisted that he was an alien every five minutes for the first few episodes. That subplot felt very much subsumed to the background, however, so when glowing triangles and great eruptions of water ensue, and Haru gleefully goes back to shooting his friends with the hypnotising water pistol, it felt like enough of a turn in tone and style to give one a severe crick in the neck.

It's actually rather well played. The last few episodes have fallen very deliberately into a formula, so when this episode begins in exactly the same way it's logicial to assume we're simply going to get more of the same. When everything suddenly turns upside down and veers wildly back into science fiction, it's a genuine surprise.

The episode ends with me desperate to find out what happens next, which is good thing - the show has remained an amiable sort of fishing comedy, but now it feels like it's going to be something more. Six episodes in, and the quality ratio is 83 per cent.
Posted by Grant at 9:03 AM