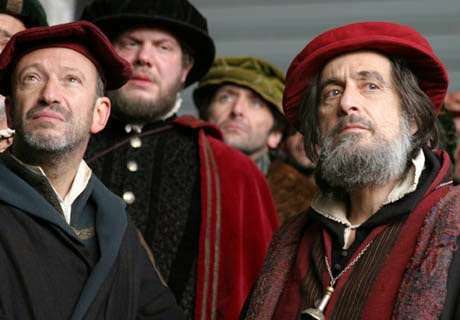 Did it really take 77 years for someone to make a talking picture out of The Merchant of Venice? There were about six made during the silent era, which I find oddly charming given that Shakespeare’s strength is the words his characters speak. Yet for all its popularity in the teens and twenties of the 20th century, it took until 2004 for someone to actually make Merchant as a talkie. This feels wrong. This feels perverse. No matter - at least a talking Merchant finally arrived, and at 138 minutes he talked quite a lot.

The Merchant of Venice is an excellent film, beautifully staged and well acted. Director Michael Radford treads a narrow and treacherous line here: the play is widely recognised as one that is, if not actively anti-Semetic, then certainly heavily informed by the anti-Semetic culture that produced its author. A lot has changed between 1596 and 2004. A lot of people have died. A lot have been persecuted. Most of us (but sadly not nearly enough of us) now know better.

Thankfully Radford has elected to meet the play half-way: he sets it in 1596, the year that Shakespeare likely wrote it, and he brings a self-aware 21st century sensibility to the now-objectionable behaviours of the 16th.

Al Pacino plays Jewish moneylender Shylock not as a comical villain but as a man badly wounded by slights and insults against him. He simultaneously deals with the Christian world because he wants its respect, and rails against it after it continues to degrade him. It’s a performance that almost makes you want to side with him than with the titular merchant Antonio, so filled it is with a justified burning resentment.

Whether or not you enjoy Pacino’s performance will likely hinge on whether or not you dislike his acting style. His performances have broadened in the past decade or so without necessarily deepening at the same time. He has always been a theatrical actor - in his latter years even more so. After his on-screen flirtation with Shakespeare in Looking for Richard it is delightful to seem him tackle one of the plays head-on.

Jeremy Irons plays Antonio as deeply melancholic, in that way that Irons’ marvellously expressive face constantly seems designed to do. The film makes overt what many theatrical productions often hint - that Antonio is not only a homosexual but also tragically in love with his friend Bassannio, who has now come to Antonio seeking funds to woo a woman. Jeremy Irons is one of those actors who will appear in anything, and the quality of his performance can vary about as much as the films he stars in. Merchant is a good film, and Irons’ performance is one of the best I’ve seen him give in years.

Is this a faultless film? Not really, but to be fair to Radford, his crew and his actors, the faults with the film are the faults with the play. It lacks a consistent tone. We are invited to engage with a dark revenge drama of money lost and pounds of flesh, and this is fine. We are invited to engage with a light romantic comedy about a man trying to solve a riddle to woo the woman he loves. This too is fine. Shakespeare asks us to engage with both at the same time - and when one half of the play is about whether or not a man is going to get brutally mutilated and killed, it’s relatively hard to care remotely about which box is getting picked.
Posted by Grant at 9:10 AM