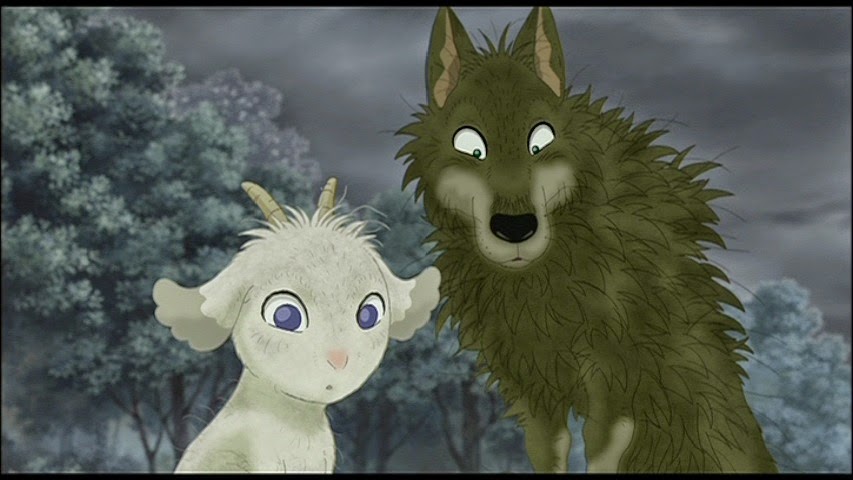 Stormy Night (Arashi no Yoru Ni) is a Japanese animated feature based on a successful childrens book. A young goat named Mei takes shelter from a storm in a pitch-black barn, not realising that a wolf named Gabu is doing exactly the same thing. In the darkness, unable to see or smell each other, Mei and Gabu strike up an immediate friendship, and promise to meet up again for a picnic the next day. And, as they say, ‘hijinks ensue’.

It is usually really difficult to track down childrens-oriented anime outside of Japan, unless it is either produced by Studio Ghibli or is based on a successful toy or videogame. Even the latter is no guarantee – I am still waiting for an English subtitled edition of Animal Crossing to become available. I picked up Stormy Night in Hong Kong because it had English subtitles, without having heard of the film before or knowing anything beyond what was on the cover. I’m extremely glad I did. Stormy Night is a really distinctive and pleasant film.

The art style is quite unusual for anime, combining CGI-enhanced backgrounds with very sketchy, almost childlike character designs. It is much more abstract in appearance than anime viewers are accustomed to. I have not seen the picture books that the film is adapted from, but I would be interested to find out if this is where the visual aesthetic is drawn from. Whatever the origin, it works well.

The voice acting is also top-notch, allowing for a combination of heartfelt drama and warm humour. The two lead performers in particular, Hiroki Naramiya as Mei and Shido Nakamura as Gabu, do exceptional work here. They’re both bizarrely interesting people. Naramiya is a former child actor and fashion designer, and has appeared in a string of films and television dramas. Nakamura has carved quite an interesting career not only as a voice actor in franchises such as Death Note, Pokemon and One Piece, but also as a live-action star in the likes of Ping Pong, Letters from Iwo Jima and Red Cliff. He’s also been an accomplished kabuki performer since the age of eight.

Like a lot of Japanese animated films it is quite long – an American animated feature from Disney for example would usually run to maybe 75 or 80 minutes in length. Stormy Night runs almost two hours. It’s a testament to the quality of the piece that it never really drags – the characters and the story keep you hooked for the whole 110 minutes.

Any film about different animals talking with each other and forming friendships is always going to be complicated if one of those animals is a predator. Films like The Lion King choose to hand-wave such issues away. To its immense credit Stormy Night tackles the problem head-on. Gabu is plagued by deep-seeded desires to abandon his budding friendship and simply eat Mei, and this internal struggles provides the film with moments of comedy and high drama. It’s a shame that films like this don’t usually get released in Australia, because I suspect there would be quite a big audience for this film. For now it’s an undiscovered gem, and one I encourage you to track down and see for yourself.
Posted by Grant at 9:25 PM