Star Trek: The Next Generation: "Menage a Troi" 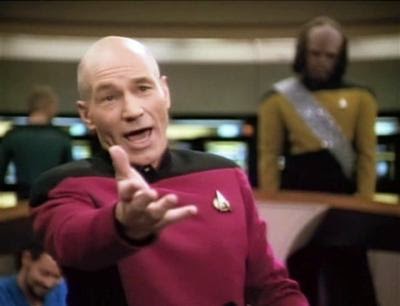 The Enterprise has returned to the planet Betazed for an important trade conference. One of the delegates, the Ferengi Daimon Tog, becomes besotted with Deanna Troi's mother Lwaxana - so much so that he promptly kidnaps her, along with Deanna and Commander Riker. While the three captives do their best to escape Tog's clutches, the Enterprise crew are not even aware they've been kidnapped.

Pretty much my two least favourite things in Star Trek: The Next Generation are pre-Deep Space Nine Ferengi and Lwaxana Troi. "Menage a Troi" combines both of them into one genuinely awful, deeply unfunny hour of television. I honestly thought about skipping it entirely, since I remembered hating it so much the first time around, but then I figured it might not be as bad as I recalled. Certainly there have been other episodes I've re-assessed over the course of this rewatch. Sadly this episode is exactly how I remembered it, with the added bonus of feeling even more dated that the other episodes of Season 3. This is really creaky and unenjoyable television.

And you have to ask the question: did Lwaxana keep coming back (this is her third episode in three seasons) because she was a useful generator for interesting stories, or did she keep coming back because Gene Roddenberry cast his wife Majel Barrett-Roddenberry in the role? There's an unpleasant whiff of nepotism about the whole episode: it marks the writing debut of Roddenberry's long-term executive assistant Susan Sackett (along with writing partner Fred Bronson, who wrote for Star Trek: The Animated Series), and was rewritten by Roddenberry himself. It could be possibly to praise the episode as a bold attempt to do comedy in the Star Trek format, but it comes in the same season as "Captain's Holiday", which did do comedy and romance and featured a Ferengi, and was actually quite enjoyable. This episode doesn't achieve half as much. It doesn't achieve a tenth. It's biggest claim to fame is that a screen capture of Picard reciting Shakespeare during the climax became a famous Internet meme.

And poor Wesley Crusher misses out on going to Starfleet Academy for another year because he's tied up rescuing Riker and Troi from this rubbish. Thankfully Picard gives him a field promotion to ensign, which means from now on he gets to wear a proper uniform on the bridge and can ditch his awful sweaters.

One bit of notable casting: the Ferengi Dr Farek is played by Ethan Phillips, who will go on to play Neelix in seven seasons of Star Trek: Voyager.

As you've probably surmised, I really hated this episode. It leaves Season 3 with 14 good episodes out of 24, and a quality ratio of 58%.
Posted by Grant at 9:24 AM