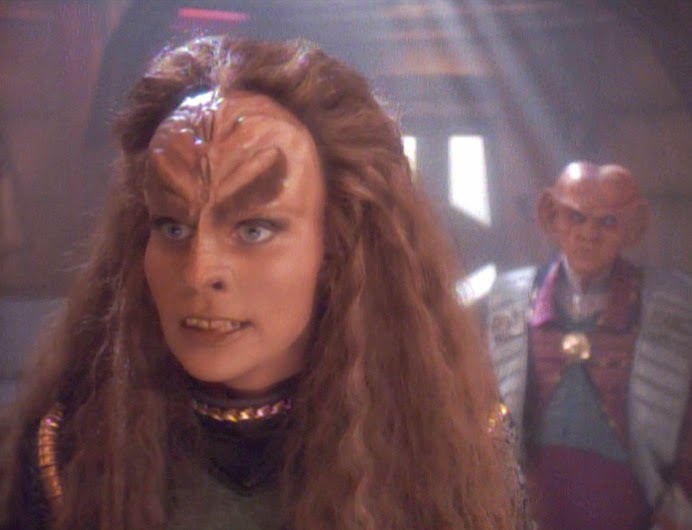 A drunk Klingon warrior assaults Quark in his bar, stumbles to the floor and accidentally impales himself on his own dagger. When Quark attempts to leverage the incident to improve his bar's popularity, he finds himself in the middle of a war between rival Klingon houses, married off to the dead warrior's widow, and face to face with the Chancellor of the Klingon Empire.

After the dramatic events of "The Search", it's actually a well-timed relief to see Deep Space Nine have some fun with a comedic episode. "The House of Quark" is a brilliant episode, combined well-timed humour with some genuinely strong character work. The Ferengi were previously treated as villains, and one-note comic stereotypes. With episodes like this they get fleshed out and redeemed as a species and a culture: they're still the same profit-oriented Ferengi, but they're written and performed in a much more realistic and more importantly sympathetic fashion.

What's genuinely impressive here is that Quark manages to be the star of his own episode, be genuinely heroic, and at no point does he sacrifice or work against his Ferengi traditions or sensibilities. Rather the episode works to find the humour in contrasting his own values against the needs of the honour-bound Klingon storyline. In one scene he takes a room full of high-ranking Klingon councillors through how one Klingon has bankrupted another through financial manipulations of their respective family holdings. It shows Quark's strengths, and the Klingons hilariously out of their depth.

One of the episode's highlights is Mary Kay Adams as Quark's new Klingon wife Grillka. She's a genuinely funny and appealing character, and Adams does a marvellous job playing her. I'm not surprised she returns to the series in Season 5: a character this good would be hard to leave on the shelf. Adams remains best known for playing Na'Toth in Babylon 5, which always struck me as odd because she only appeared as Na'Toth twice in that entire series. She's as prevalent in Deep Space Nine as she was there, and her character here is better written.

A subplot of this episode focuses on Keiko O'Brien (Rosalind Chao) being forced to close the school after most Bajoran families flee the station for fear of a Dominion invasion. On the one hand it's great that the threat of the Dominion is re-emphasised, adding a level of continuity to the season's main arc. On the other it's yet another subplot that basically boils down to "Keiko is unhappy about something". She's always unhappy. There isn't another character in the whole of Star Trek whose storylines are so heavily based around having a bad time. I feel sorry for Rosalind Chao for having to constantly make that sad face. On the other hand, this episode does kick off the developing friendship between Miles O'Brien and Dr Bashir - they've played around with the idea a little in the first two years, but here is where the friendship kicks off in earnest: it's one of the nicest friendships Star Trek has.

Three good episodes in a row is giving me rather high expectations for the rest of the season. I'm waiting for the other shoe to drop.
Posted by Grant at 8:52 AM