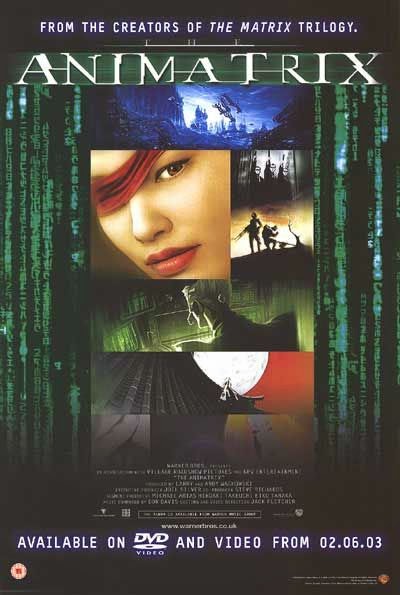 When The Matrix became a global box office smash, and Warner Bros approached the Wachowskis about writing and directing a sequel, they didn't just make the one film. Instead they engaged in perhaps the most ridiculously ambitious plan for a sequel ever. It's not that they produced more than one sequel at once: Back to the Future did that in 1989, shooting Part II and Part III in one big protracted shoot. They also added a videogame and an anime: to get the story of what happened next Matrix fans weren't just required to watch a film, but rather watch three films and also play the game. It was a remarkable achievement in cross-media storytelling - and their story actually continued in another game a few years later. It wasn't necessarily the smoothest way to tell a sequel, though. After enjoying a rewatch of The Matrix after a couple of years, I figured I'd keep going and review the whole ensuing franchise - for better or for worse.

So The Animatrix is a portmanteau film, consisting of nine animated short films set in the fictional universe of The Matrix. Four of the shorts were released online in the lead-up to The Matrix Reloaded's release; all nine were shown in cinemas in Australia a week before Reloaded came out. It made for a rather effective teaser at the time, and helped to hype up the hardcore fans to an exceptional degree - myself included. 11 years later and it's actually a little hard for me to sit through in one sitting. In the end I had to take a break after the first six shorts, and come back a few days later to rewatch the final three.

Overall it's an impressive little add-on, and does a great job of highlighting and respecting the stylistic roots of The Matrix in anime. Like most films of this type it's a bit of a mixed bag, but there are certainly a few highlights worth watching.

The first short, "Final Flight of the Osiris", is a direct prologue to The Matrix Reloaded, in which the crew of the human ship Osiris uncover the machines' plan to drill down to Zion and destroy their last refuge. It's directed by Andy Jones and animated by the same SquareSoft team that produced Final Fantasy: The Spirits Within. It's partly entertaining, but also partly tedious: it begins with a ridiculously sleazy sword fight in which the two leads get progressively naked, and it climaxes with some ridiculously unrealistic gymnastic contortions as an operative races to deliver word of the machine army in time. Between those two bits, there's really nothing else that couldn't have been produced in live-action - and indeed with the photorealistic animation it may as well have been in live-action. Not a good start.

Much more effective, and pretty much worth the entire price of admission, is "The Second Renaissance", Mahiro Maeda's two-part re-telling the machine war that led to the Matrix's creation. It's neatly animated and well paced, and explores an entirely unseen side of the Matrix universe. Nothing introduced in this short is necessary to understand the Matrix movies, but it does provide interesting background information and enriches the viewing of the movies down the line. The machine capital of Zero One, for example, constructed on top of what was once Saudi Arabia, turns up again in The Matrix Revolutions.

Shinichiro Watanabe (Cowboy Bebop) directs "Kid's Story", which showcases a high school student inside the Matrix who manages to work out that he's inside a computer simulation. The titular kid turns up in Reloaded and Revolutions as well, which makes for a nice link but not a necessary one (he's actually kind of irritating in live action). The animation style is distinctive and fluid, and quite removed from much of Watanabe's other work.

Beyond that the film all gets rather repetitive and disposable. "World Record" and "Beyond" show what life is like for those still stuck within the Matrix, but beginning to see that something is amiss in their day-to-day life. "Program" is a strange short set in a virtual recreation of feudal Japan, pretty much tailored to the tastes of its director Yoshiaki Kawajiri (Ninja Scroll). "Matriculated" is a slightly odd and inaccessible short from Peter Chung, creator of the similarly odd and inaccessible Aeon Flux. "A Detective Story", written and directed by Watanabe and featuring Trinity, is probably the best of this latter bunch, but even it is fairly disposable.

As a side project for the hardcore, The Animatrix is an interesting experiment. It's flawed, and fairly uneven, but if nothing else it's worth checking out just for "The Second Renaissance". After watching that, some of the machines' actions don't seem quite so unreasonable.
Posted by Grant at 9:03 AM