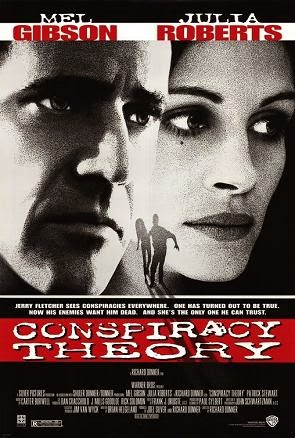 Jerry Fletcher (Mel Gibson) is a paranoid taxi driver who writes his own crackpot newsletter while obsessing over attorney Alice Sutton (Julia Roberts). When he's suddenly abducted off the street by mysterious government agents, he escapes in a mad panic to find out what he knows and why he's been targeted.

Sort of. It's difficult to write a solid synopsis of Conspiracy Theory because it twists around at least twice to change what story it's actually telling. It starts off rather disturbingly, presenting Gibson as an obsessive and slightly frightening stalker, but not necessarily in a way that invites the audience to acknowledge the criminality and gross distastefulness of what he's doing. Thankfully by the time the film's climax comes around things look a little different, and its moral compass is more assured and understandable.

Other than that, is the film any good? Well...

Conspiracy Theory is one of those films that probably suffers from having too high and budget and too famous a cast. It begs to be some kind of low-budget, guerrilla-style thrillers, one that can afford to take some creative risks and make its characters a little edgier. Instead it's got Mel Gibson and Julia Roberts, then two of the most popular actors in America, so instead of making Jerry the strung-out, slightly frightening character he needs to be we get Gibson doing a slightly more manic variation of his Martin Riggs character from Lethal Weapon.

It's all directed very slickly by Richard Donner, who is nothing if not professional. He's a director that can make pretty much any film watchable. He's not flashy: he shoots and edits entirely in service of the story he's telling. He's got a very strong handle on timing and narrative structue. Some of his films, like Superman, are considered classics. Others remains cult favourites, like The Goonies and Ladyhawke. I think Conspiracy Theory falls into that third category: films that are efficiently made and decently acted, but simply don't tell the most interesting or original stories. There are ideas here that could be exploited in really interesting ways, but the (I assume studio-dictated) formulaic plot simply doesn't allow them to breathe.

Watchable? Yes. Entertaining? More or less, yes. As good as it could be? Nowhere close. This may have a bit of an edge, and a spark of some interesting ideas, but the bottom line is Conspiracy Theory is by-the-numbers Hollywood, through and through.
Posted by Grant at 10:59 PM