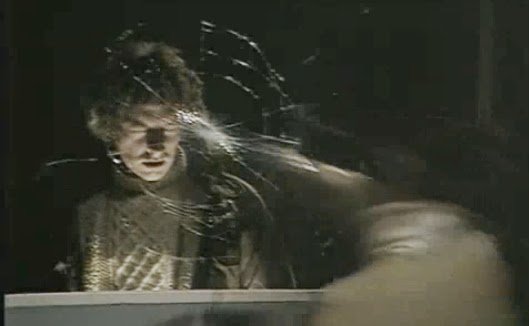 I reviewed the first episode of The Omega Factor about 18 months ago, but the recent announcement by Big Finish Productions of a sequel audio drama starring Louise Jameson led me to finally jump back and continue rewatching the series. This is one of my favourite BBC science fiction series: cleverly written, well acted and quite far ahead of its time. It follows journalist Tom Crane (James Hazeldine), a powerful latent psychic who is drawn into the affairs of Department 7, a government agency assigned to investigate the paranormal. He assists Dr Anne Reynolds (Louise Jameson), under the watch of her boss: psychiatrist Roy Martindale (John Carlyle). The series ran for 10 episodes before controversy and public complaints saw it summarily cancelled before a second season could be produced.

"Visitations" sees Crane continue to come to terms with his wife's death, and re-connecting with his brother - both of whom already seemed to have some contact, both personal and professional, with Department 7. He and Anne are dispatched to an old manor house when it shows signs of being haunted by spirits - or something even worse.

While the pilot episode, "The Undiscovered Country", was very much a paranormal thriller, "Visitations" makes the easy shift into full-blown horror. The BBC often struggled to make genre television with limited production budgets, but a ghost story is something at which the broadcaster regularly excelled. The gold standard for this kind of story remains their 1972 teleplay The Stone Tape, and events in "Visitations" reminded me of that play on more than one occasion. This isn't to suggest it's derivative: simply that techniques that worked in one production get used again, just as effectively, in the other. Eric McDonald has written an excellent script for this episode.

It's down to the actors to make it work, of course. This kind of horror story - flashes of light, creaking doors, whispered voices, strange chanting recorded onto audio tapes from empty rooms - all requires people to react to it in order for it to have any potency. The cast pull this off brilliantly, both the regulars and the guest performers.

The episode doesn't spend the whole 50 minutes inside a haunted house, of course. The first half is dedicated to further establishing the characters and the ongoing story arcs for the series. Tom begins experiments into his own psychic abilities, under Martindale's supervision. He re-connects with his brother (Nicholas Coppin), and grows closer to Anne. There's a pronounced sense of unease about Department 7 that hangs over the episode, as if there's something about their activities that Martindale doesn't want Tom to know.

Pilot episodes are comparatively easy - introduce the characters and the setting, develop an aesthetic and a tone. The second episode is where TV dramas have to actually demonstrate those concepts have legs. "Visitations" demonstrates it and then some: it's a fantastic little hour of television.
Posted by Grant at 11:22 AM