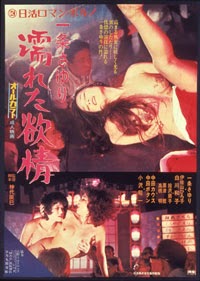 Well, yes and no. Mainly yes to both. When Japanese audiences migrated en masse from cinemas to television sets, the film industry was left with a near-insurmountable crisis. It's a crisis that film studios endured across the world, of course, with different countries' studios developing different responses. In the USA the main response was to make films bigger and more expansive than what could be seen on television: grand visual spectacle, shot in Cinemascope, with an impact you could only get by sitting in a movie theatre. In Japan it was not that easy. For one thing, the overwhelming majority of Japanese films had been shot in Cinemascope (or, at least, one of its handy local equivalents) since the early 1950s. At the same time budgets were never really big enough for a Japanese studio to afford grand visual spectacle. The giant monster action Toho could produce for cinema was not that far removed, as far as audiences were concerned, from the stuff Toei was making for television.

So what do you make that people can't see at home? In the days before home video, the answer for Japan's studios was obvious: you made sex and violence.

Following Desire stars real-life stripper Sayuri Ichijo as a fictionalised version of herself, alongside Hiroko Isayama as young aspiring stripper Harumi and Go Awazu as Dakichi. The film follows Ichigo's day-to-day career, as she pushes he limits of what's legal and gets into trouble with the local police.

It's a weird thing to watch, because there's genuine talent involved in the acting, and the film is shot in a very contemporary and edgy fashion. It has an interesting angle on the treatment of gender and sexuality in Japan at the time: note that it's only ever the women who get arrested and harassed by the police, never the men paying for the women to take their clothes off. The prestigious magazine Kinema Jumpo awarded the film Best Director, Best Actress (Hiroko Isayama) and Best Screenplay for its year. In 1999 they went back and announced it as one of the 100 greatest Japanese films of all time. So one level it's a genuinely impressive film. At the same time you do find yourself spending a lot of time watching Ichijo take her clothes off. There's a decent enough plot going on, and Kinema Jumpo were right on the money with Hiroko Isayama's strong performance, but in the end the sex and stripping really does feel like it's intruding on a different movie.

Roman pornos such as this helped keep the Japanese film industry afloat in the 1970s, and it was an outlet for numerous industry creatives to continue honing their skills and staying in work. At the same time, it's not entirely enjoyable to watch. There's a really difficult problem with this sort of film, which appears to bemoan the exploitation and societal control of women - and then demands that they take their clothes off on camera. I came for the historical significance of its genre, I watched for the acting and photography, I got bored by the obligatory nudity. I'm not sure there's much else were worth talking about.
Posted by Grant at 9:20 PM