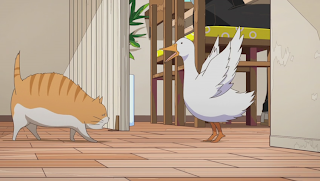 "Discouraged Jerking" sounds like a really dodgy title. It immediately brings to mind the sort of Japanese animation I don't want to have brought to mind. Sorry. It's probably a translation issue. Let's move on.

This is the fifth episode of Tsuritama, a 2012 anime series in which a stifled, awkward teenager named Yuki is taught to fish at the behest of a gregarious blonde alien boy named Haru so that he can go on to save the world. They hang out with a third teenager, the more skilled and laconic Natsuki. They also seem to be constantly crossing paths with Akira, an Indian boy in a turban who is constantly talking to his duck. Oh Japan. Never change.

"Discouraged Jerking" sees Haru decide to commit properly to the fishing hobby. He wants to buy his own rod and reel, and to get the money to do so he signs up to help on a game fishing boat during their school holidays.

This episode feels a lot more self-contained than the other four. There are still references to the ongoing plot, but in the main it's just a story of an under-confident teenager learning how to fish on the open ocean. I'm reasonably confident that you could watch this episode cold and still have a reasonably good time - although you'd have to brush over the motions that one of them is an alien. And the Indian kid with the duck. I don't understand the duck. I'm worried they will never explain the duck.

It's impressive that they've given Haru such good character development. In episode one he was paralysed by his social phobias and anxiety attacks. We're five episodes in, and he's engaging with friends and getting better and better in stressful situations. It's been a really smooth, believable progression, and I really hope it keeps developing for the rest of the series.

Four good episodes so far out of five gives Tsuritama a quality ratio of 80%. You wouldn't expect it from the pitch, but there you go: sea bass fishing to save the Earth. Who'd have guessed?
Posted by Grant at 6:26 PM