Star Trek: The Next Generation: "Sarek" 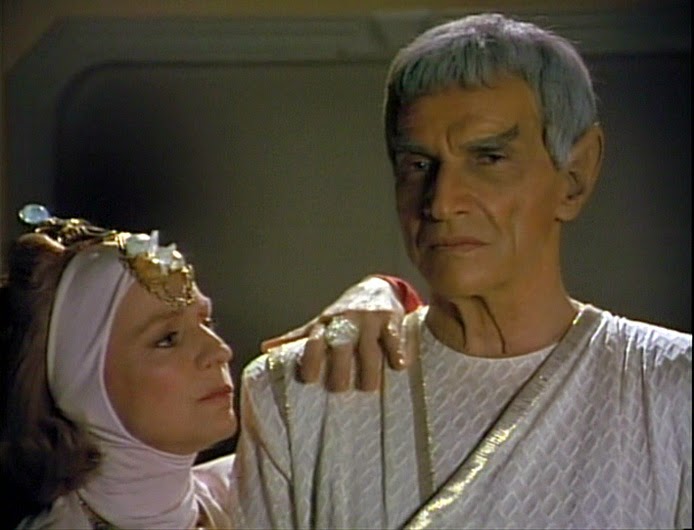 The Enterprise is to play host to the alien Legarans. The Federation Ambassador Sarek of Vulcan, arrives to lead the negotiations, but something is amiss. His staff keep him in seclusion. He does attend a Mozart recital in his honour, but leaves halfway through when he begins to cry. Meanwhile Sarek's own psychic powers are causing the Enterprise's crew to turn on one another in uncharacteristic fits of rage. With the summit with the Legarans growing ever closer, Captain Picard must confront Sarek to prevent the situation from deteriorating any further.

An uncredited cameo by Dr McCoy aside, it took almost three whole years for The Next Generation to finally re-introduce a character from the original series. This was a huge step forward: for the first two seasons it was Gene Roddenberry himself who fiercely refused to allow pre-existing characters to appear, or even be name-checked, in case it held the new series back from creating its own identity. Even when McCoy cameoed in "Encounter at Farpoint", he was never actually named on-screen. In the case of "Sarek", a pre-existing script saw a character develop who was a venerated and elderly ambassador and an icon of the Federation. By turning that character into Sarek the production team effectively jump-started the episode: seeing a character you've never met before suffer from developing dementia is sad, sure, but seeing Spock's father succumb to senility is absolutely heartbreaking.


This is an incredibly well-written episode, credited to Peter S. Beagle but having undergone significant rewrites by executive story editor Michael Piller. It's also beautifully directed. The Mozart recital (which sneakily includes some Brahms as well) makes use of a beautiful non-verbal sequence as various characters realise how much the music is affecting Sarek.

Mark Lenard does an amazing job in the role. This was his fourth turn in the role after "Journey to Babel" in the original Star Trek and two of the movies, but it's far and away the most challenging script he ever received. He plays it marvellously: the stoic, logical Vulcan shell progressively cracking over the course of the episode until he finally breaks down in a rage in front of Picard. Patrick Stewart gets the other half of the episode's dramatic meat, doing an outstanding job portraying Picard who - having mind-melded with Sarek to help calm the latter's emotions - emotionally collapses under the weight of his rage, grief and overwhelming regret. At the height of his fit of emotion, Picard utters one word - "Spock" - that speaks volumes to some unspoken tragedy. It's something the series will revisit in Season 5. It's a scene that's particularly significant - Picard also mentions Sarek's first wife Amanda - because it finally seals together The Next Generation with its predecessor. It doesn't feel like two completely different shows any more. Now it's just Star Trek.

It's significant that the episode doesn't end with a cure. The mind-meld with Picard may have stabilised Sarek's emotions enough for him to complete the negotiations, but his condition will deteriorate and eventually kill him. He leaves, thanking Picard for his help, but there's a melancholy edge to the whole affair. We're used to 'reset buttons' in Star Trek: whatever happens throughout an episode, everything will be okay by the end. This time it's not. This time we just have to watch Sarek beam away to return to Vulcan, and leave Picard pensively in the transporter room.