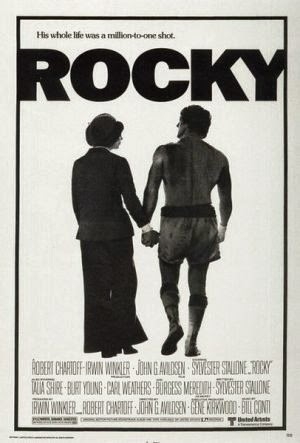 There are certain movies that have a large enough cultural footprint that it's difficult to separate them from their pop culture references. It can be a struggle to watch Casablanca without quoting its famous lines, for example, or to see Kane's death at the beginning of Citizen Kane without thinking of the numerous parodies of the scene. I think Rocky easily fits into this category of film: hugely popular at the time, its elements and tropes were repeated in five sequels and copied, referenced and parodied in countless subsequent films. TV shows and cartoons. How do we see through that? How can we strip everything away and just assess the film on its own merits?

Rocky was written by and stars Sylvester Stallone. He was an aspiring actor who was failing to get any work. This in itself isn't a surprise: a forceps injury during childbirth severed a key facial nerve, leaving him with dropping features and a tendency to slur his speech from one side of his mouth. Broke and desperate, Stallone wrote a screenplay purely so that he could have something in which to star. Once written, his Rocky screenplay was good enough that United Artists offered him $250,000 to buy the script and make it with Burt Reynolds or James Caan. Stallone held his ground, and with producers Irvin Winkler and Robert Chartoff and director John G. Avildsen, Rocky was finally made on a $1 million dollar budget with Stallone in the title role. It not only launched his successful movie career but it defined it as well. It's an amazing screenplay tailored perfectly to the skills set of its author.

We all probably know the plot: Rocky Balboa (Stallone) is a failed professional boxer. At night he plays small local bouts, and during the day he works as a debt collector for a Philadelphia loan shark. Meanwhile the world heavyweight boxing champion Apollo Creed (Carl Weathers) has a problem. His opponent has dropped out of his latest title match. With a huge sum of money to be lost if the match is cancelled, Creed decides to offer an unknown, untested boxer a shot at the heavyweight title. He chooses Rocky as his new opponent, giving the downtrodden, troubled nobody one final shot at success.

There a number of things that have always impressed me about Rocky. Let's run through them one by one. First of all there's Stallone's screenplay. It's beautifully constructed, telling a strong and appealing story with a perfect three-act narrative. The story isn't complex, but that allows Stallone to spend more time fleshing out and developing the characters.  They are a memorable group too, and uniformly brought to life by excellent performances. Rocky himself is a marvel: he's not bright, but still glimmers with ambition for a better life. He's honest and likeable, yet pent up with frustration. More than anything he's hurt: hurt that he never got the shot at success he wanted, hurt that people mock him for his slurred speech, hurt that he's discriminated against and derided for his Italian heritage. At times it feels remarkably raw, as if Stallone himself is exercising his own personal demons by typing them onto the page. It's Stallone's best-ever role as well. I've always been a fan of his work, and despite dominating the 1980s through two main roles - Rocky Balboa and John Rambo - it's far and away Rocky that brings out his strengths as an actor.

Good as Stallone is, the film is almost completely stolen by Burgess Meredith as Mickey Goldmill, the elderly owner of the local boxing gym. Like Rocky he had chances in the past, and like Rocky they didn't get him to where he wanted to be. There's one scene midway through the movie: Mickey, who has already all-but-forced Rocky out of his gym earlier in the piece, now comes to him to beg to be his manager. He can't bring himself to outright ask for the opportunity, so he stalls and mutters, and drones on about his own career. He insults Rocky, fiddles with his hat, and basically says anything other than what he actually wants. Meredith's awkward, fidgeting performance is simply stunning. He's playing several emotions at once: desperation, rage, shame, embarrassment. In just this one scene he imbues his character with more nuance and depth than most actors provide in entire films (or careers).

During his journey to the climactic match Rocky also develops a romance with Adrian Pennino (Talia Shire), the timid and awkward sister of his best friend Paulie. Like Meredith, Shire does a profoundly good job of playing immense depth and complexity. It's particularly fascinating to watch her body language over the course of the film, as Adrian's relationship with Rocky encourages her to stand up and become more confident. It's done so smoothly that you don't even realise it's happening, but watch Shire's first and last scenes alongside each other and it's almost like you're watching different women.

Burt Young gives a bold performance as Paulie, who is an actively dislikeable character: rude, selfish, greedy and dismissive. He would be almost impossible to watch were he not so real: he feels like an actual person you would meet, and know, and feel semi-obliged to talk to from time to time. He's a perfect example of what makes Stallone's screenplay so good: it's real. The story is simple, and it's told in a very traditional Hollywood fashion, but it's entirely about people in which the audience can believe and recognise. Carl Weathers, meanwhile, gives a pitch-perfect performance as the experienced, egotistical champion Apollo Creed, managing to express his character with enough charisma that he never becomes anything so simple as an actual villain.

Stallone's greatest achievement is the film's ending - so look away now if you've never actually seen the movie. It would have been easy, and superficially satisfying, for Rocky to overcome the odds and beat Creed in the ring. Stallone refuses to do the easy thing: by the film's end he has positioned his characters so that winning is never Rocky's goal. Instead all he wants to do is reach the end of the 15th round on his feet. This isn't a film about winning against all odds: it's about surviving. The film's final moments, with Rocky - half-blind from swollen injuries - screaming for Adrian, are so emotionally effective you almost don't listen to the judges' verdict. Apollo Creed wins the match on points, but not only does Rocky not care but we the audience don't care either. We've got the ending we want, and it isn't about becoming a boxing champion. It's all about self-respect.
Posted by Grant at 8:51 AM