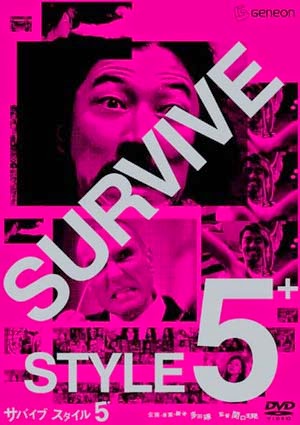 It’s always a bit of a struggle to fully comprehend Survive Style 5+. It’s a deliberately weird, off-kilter movie: the kind that you simply watch and enjoy on its own merits rather than waste time attempting to make sense of it all. And good luck defining its genre. It’s ostensibly a comedy, but it reaches that genre via action, horror, drama, and pretty much every other type of film you can think up.

Tadanobu Asano plays a man who keeps murdering his wife (Reika Hashimoto), and burying her in the woods nearby, only to come home and find her still alive and angrily waiting for him. A suburban father (Ittoku Kishibe) is hypnotised into thinking he is a bird, with frustrating consequences for his family. A trio of bored teenagers pass their time breaking into houses. An advertising executive (Kyoko Koizumi) struggles to think up the perfect advertising campaign.

So far, so good. What tips the movie over from generally weird to outright surreality is the addition of English footballer-turned-actor Vinnie Jones as a furiously angry professional killer, accompanied at all times by an incongruously polite Japanese translator (Yoshiyoshi Arakawa). ‘What is your function in life?’ screams Jones, in pretty much the only aspect of the film that actually unites these disparate storylines.

It is all the work of director Gen Sekiguchi, who cut his teeth directing fast-paced and quirky television commercials before making the leap to feature films. His commercial background serves him extremely well: Survive Style 5+ is an extremely vibrant and eye-catching film. His use of colour is superb, giving the whole work a lush and over-saturated aesthetic. It not always be easy to understand what is going on, or why we are being shown the storylines we are seeing, but the film is never less than an absolute feast for the eyes.

The best sequence of the film is the story of Asano’s murderous husband and Hashimoto’s bluntly violent murdered wife. Their performances are great, and the scenes play out mostly without dialogue. It’s a perfectly-pitched black comedy without stunning costuming and visuals. The image of Hashimoto floating in mid-air, dressed in the most beautiful lime-green dress and pausing moments before an elaborate martial arts kick, is pretty much the most striking image of the entire film.

This is a film full of striking images and eye-catching moments, best simply experienced rather than something as banal as understood.
Posted by Grant at 9:03 AM