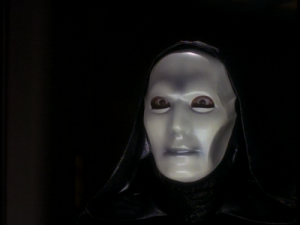 Jadzia Dax begins to act erratically and out of character. Then she starts to hallucinate a mysterious masked man. When Dr Bashir is unable to provide any answers he and Commander Sisko use the Defiant to take Jadzia back to the Trill homeworld and to the facility where Jadzia and the Dax symbiont were first joined.

The Trill homeworld: I love it. Sometimes Star Trek gets so creatively lazy that they can't even be bothered naming a planet. This is an odd episode really. It only exists because one of the executive producers saw a stage magician do a neat trick with face masks, and so ordered the writing room to come up with an episode that was based around it. It does give the series the opportunity to visit Dax's home planet for the first time and showcase the Trill a little more, but it by-and-large squanders that opportunity. Despite all of that it's still rather watchable, because Deep Space Nine has an advantage that other Star Trek series lack: it has depth of character.

What is enjoyable about this episode is not being able to see the Trill's home planet, or trying to unravel the mystery of Jadzia's hallucinations. It's seeing Jadzia get the support of her friends and colleagues, or seeing the command crew bond over Sisko's cooking (this is the episode that establishes he's the son of a New Orleans restaurateur). In particular it's seeing the close friendship between Jadzia and Julian Bashir. If you jump back to Season 1, he's a genuinely creepy sex pest: constantly following her around, refusing to take no for an answer, trying to ask her out on dates again and again. Here they're friends. It's much nicer to watch, feels more natural, and does wonders for the audience's ability to actually like Bashir. The episode also takes time to highlight Sisko's friendship with Jadzia as well. The series started with him knowing Dax via its previous host Curzon. Now we see how close he's become to Jadzia as well.

The central mystery and its resolution - Dax had a host who went mad, murdered someone, and then the symbiont was transferred to someone else with its memory erased - has a lot of merit, but the ideas are never fully exercised by the time the episode ends. Dax now has the memory of being a mentally unwell musical composer and a murderer - that's huge, and more importantly that's the story I'm interested in seeing. Instead we hit that point right when the credits roll. It's a missed opportunity. Similarly, the revelation that as many as fifty per cent of Trill are capable of bonding with a symbiont, rather than the 0.1 per cent the public were told, is fodder for a brilliant story, but barely gets thirty seconds here.

At least we get several scenes of a magician in a mask. This episode doesn't get my tick of approval, leaving Season 3 four episode in and with a quality ratio of 75 per cent.
Posted by Grant at 5:07 PM