Star Trek: The Next Generation: "The Best of Both Worlds" 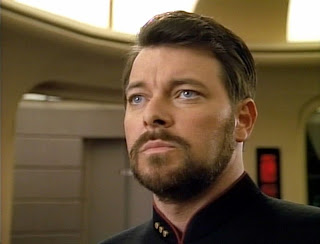 It's 18 June 1990 and time for Star Trek: The Next Generation's third season finale: "The Best of Both Worlds". When the Enterprise responds to a distress signal from a Federation deep space colony, they find that the outpost has been entirely destroyed - scooped up and consumed right out of the planet's surface. Such devastation has been seen before: the Borg have finally returned, and Starfleet isn't ready.

"The Best of Both Worlds" is possibly the most famous episode of Star Trek: The Next Generation ever made. Certainly it boasts Star Trek's most famous cliffhanger. No, more than that: this episode ends on one of the most famous cliffhangers in the history of American television. I don't say that lightly: this ranks up close to J.R. Ewing getting shot in Dallas. The image of Captain Picard, taken over and augmented by the Borg, ordering Riker to surrender - and Riker ordering the Enterprise to open fire on its own captain, was jaw-dropping back in 1990. It seemed impossible to work out how the characters could all possibly survive.

It's a cliffhanger that deserves its fame, but it's also one so famous that it seems to overshadow the rest of the episode. This is one of the best instalments of The Next Generation I've rewatched so far, but the episode's extensive merits are constantly overlooked in favour of its climax.

The first thing to realise is that, despite the iconic scenes of Picard turned into a Borg, "The Best of Both Worlds" is Riker's story. His personal crisis is to what the episode's title refers. He is comfortable on the Enterprise, and has never been happier in his entire life. He enjoys the company of his crewmates, and he is fiercely addicted to serving under Jean-Luc Picard. Now Starfleet has come knocking once again, offering him his third commission as a captain - and he doesn't want to go.

Contrasting against Riker is Lieutenant Commander Shelby (Elizabeth Dennehy), Starfleet's appointed expert on developing a response to the Borg threat. She's young, aggressive and enthusiastic to a fault - and Riker is standing in her way. She has her eyes on becoming first officer of the Enterprise, and until Riker steps up to the captain's chair she's going to be stuck behind him. Picard notes her similarity to Riker when he first joined the Enterprise, and it's a similarity that showcases just how far the character has come. He's relaxed over the last four years, become at ease with his authority over the crew. He's become a major source of humour in the series, and one of the most likeable characters. The writers and particularly Jonathan Frakes deserve a lot of praise.

This episode forces Riker to make a choice: does he want to push his career forward, or does he simply want to be happy? It's a dilemma a lot of people face in their lives, and it's exactly the sort of thing Star Trek excels at: taking everyday problems and exploring them with ray guns and spaceships. It's probably not a coincidence that episode writer Michael Piller wrote this while facing the same dilemma: he agreed to run the writing room of The Next Generation for one season. Now that the season's up, he's facing the same choice: onward and upwards to bigger and better shows, or stay with the Star Trek team and continue writing adventures for the Enterprise? The fact that Piller wrote this episode in the belief he wasn't coming back for Season 4 actually helps it: because writing the second part of the story wasn't his responsibility, he could extend the cliffhanger to much bolder extremes. He could make the best ending he could, and let someone else work out how to get out of it. Of course by choosing to stay onboard for Season 4, he wound up just making trouble for himself - but here in this episode it works brilliantly.

This episode feels genuinely climactic. We first saw signs of the Borg in the Season 1 finale, "The Neutral Zone". We met them properly in "Q Who", partway through Season 2. It's been more than a year and the confrontation fans were waiting for has finally arrived. The Borg are an exceedingly difficult enemy to write. They're uniform and emotionless. They never get excited, they never run, they never stop. Jonathan Frakes nailed them when he directed Star Trek: First Contact, because he understood they were basically the Star Trek version of George A. Romero's zombies. Later episodes of The Next Generation will struggle to accommodate the Borg because they immediately want to humanise them. "The Best of Both Worlds" doesn't do that, and as a result it pretty much represents the Borg at their all-time best.

I've been asked why, with so many of these episodes being mediocre or worse, have I continued with this episode-by-episode rewatch of The Next Generation. The answer is simple: episodes like this. I try not to use the word 'masterpiece' to describe TV episodes unless they really warrant it. "The Measure of a Man" did. So did "Yesterday's Enterprise". So does "The Best of Both Worlds".