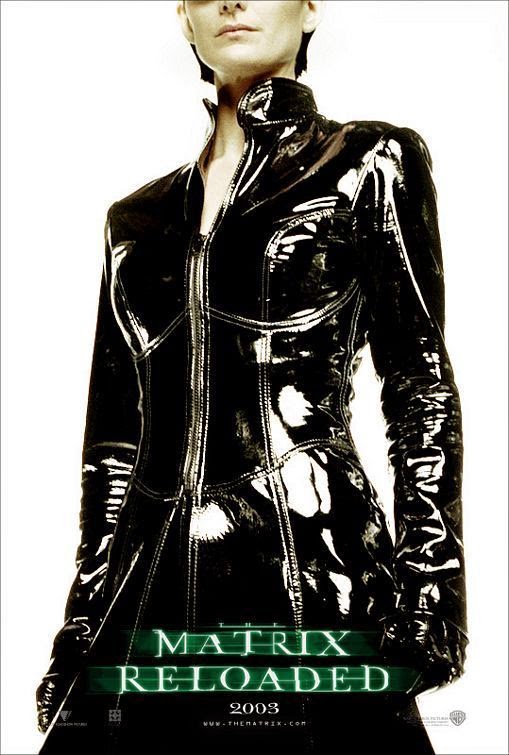 Anticipation was extremely high in 2003 for The Matrix Reloaded. After its successful cinema release in 1999, The Matrix had only become more popular as growing numbers of viewers caught up with the film on home video. Anticipation was met with hype from Warner Bros, who - with the addition of The Animatrix and the videogame Enter the Matrix - turned Reloaded into a media phenomenon. Everybody wanted to see this film. I accompanied many of my friends to a midnight screening, so keen were we to see what happened next.

Reloaded opens some undetermined time after The Matrix. The machines have located the human refuge of Zion, and massive engines are burrowing through four kilometres of rock to reach the city and kill everyone inside. In a last-ditch mission to stop the human-machine war, Morpheus, Trinity and Neo re-enter the Matrix to meet with the Oracle and find a way to shut down the system once and for all.

This is a fairly contentious movie. Critical reviews were mixed, although they tended towards the positive. Today Metacritic gives the film a weighted score of 62%, which is positive but unexceptional, and certainly isn't as strong as the 73% scored by the original Matrix. Rotten Tomatoes scores the film more generously, with a weighted average of 73% - although again, not as strong as the original's 87%. An awful lot of vocal science fiction fans actively loathed the film - and continue to express their disdain for it whenever it comes up in conversation. I loved the film at the time, and honestly couldn't understand some fans' hostility towards it. It's been quite a few years, however, so I was keen to see it with a fresh perspective.

I actually found it very interesting to watch again. It's easy to see why I fell in love with the movie so much at the time, because all of the scenes and action sequences that I enjoyed are all still just as enjoyable. At the same time it is a critically flawed film. It's basically the sort of science fiction film I'm an absolute sucker for: one with enormous ambition that seeps through every crack, and that is ultimately less than the sum of its parts. It's nowhere near as tightly structured as The Matrix, and that's what causes it to shoot itself in the leg. So let's make a few assumptions - the action is great, the freeway chase outstanding, the costumes beautiful and the photography highly appealing - and move on to the bits that are a little more interesting to discuss.

There's a massive shift in the world of the Matrix here, and at the time it seemed to go broadly unacknowledged. The Matrix presented a world where the Machines were a faceless conglomerate mass, uniform in attitude (save for the Oracle) and similar in appearance. It's a plot point of the original film that the Agent Smith program begins to go a little off-kilter and individual. The fact that Smith has somehow survived into Reloaded goes unexplained, but it doesn't seem too out of place. What does seem out of place is the sudden and massive influx of distinctive, political AIs all over the place: gaming one another for power, setting up their own agendas, and bickering between one another when the humans aren't even around. It's not a bad idea in itself - in fact it seems ripe for all manner of interesting stories - but it chafes rather badly against the original film. There's no easing into the new status quo; it's simply presented as the new state of affairs via a conversation between Neo and the Oracle.

There's also a massive slice of important back story that is either insinuated and then dropped, or doesn't actually exist - but sloppy writing makes it appear to be there. Early in the film, the oldest councillor in Zion (Anthony Zerbe) takes Neo down to the bowels of the city, where he shares an ominous conversation about how the humans are reliant on machines. It feels like foreshadowing - in fact, if it isn't then it's questionable why the scene exists at all. During the film's climax the Architect (another distinct AI) tells Neo that he is the sixth individual of his kind, and like his predecessors he must select a group of 13 humans from the Matrix to be released into the real world and set up the seventh iteration of Zion. The film stops short of drawing the line to show that Zerbe's councillor is the fifth Neo, but looking back on the council of 14 elderly humans and a specific line of dialogue that points out the council are exclusively old people it's difficult to draw any other conclusion. It's a massive twist, and to my mind a brilliant idea, but the screenplay is so jumbled and dialogue-heavy that the revelation seems to get lost in the rush.

The screenplay is consistently unfocused and misdirected. The film takes an interminable time to get going. Once it's up and running, and guns are blazing, it's an entertaining as the original, but it takes a solid 40 minutes to get to that point - and it feels like at least five of those 40 minutes are spent dancing in a cave. By the film's climax the screenplay runs into a more difficult problem. The plot hinges on the revelation that Neo's entire life has been an intended process of the Matrix - generate an outlier who can draw together all of the rogue elements that are breaking the Matrix apart, tempt those elements out into the open with them, wipe the slate clean and then send the outlier to start the process up all over again. Given that Neo is the sixth such outlier, it means the Matrix is at least a good 120 years older than any of the humans think it is. It could be even older. These are big, brilliant concepts, but unlike the original film - in which complex philosophical concepts were effectively boiled down into street chases and gunfights - the Wachowskis resort to stopping the entire film so that Neo can have a conversation in a room. It's one of the most egregious examples of telling instead of showing that I can remember. They also make a critical error in making the Architect talk in deliberately long and complex sentences ('Your life is the sum of a remainder of an unbalanced equation inherent to the programming of the Matrix') that makes his scene even more difficult to sit through. What he says makes sense, and the ideas he expresses are as solid as anything in the trilogy, but it's presented in practically the most audience-unfriendly manner possible.

The film ends with the sudden revelation that Neo can use his powers to control and shut down robotic sentinels in the real world. It's an awesome climax, because it tees up precisely with what the Architect had claimed and points to an inescapable conclusion: what Neo and his friends think is the real world is simply another level of the Matrix. It's a self-repeating system that identifies and isolates those who cannot accept the virtual reality of the Matrix, and simply ports them up into a reality they can accept. When too many people enter the upper level, the system purges them and begins again: hence the title, The Matrix Reloaded. The only odd part about this conclusion is that the third film, The Matrix Revolutions (the title of which also seems to directly reference the concept), contradicts this entirely. It retroactively weakens the second film, because in retrospect almost everything that happens here seems nonsensical.

I'm not usually a fan of people claiming a sequel can be so bad that it ruins its predecessor, but in the case of Reloaded and Revolutions I actually think this is true. This is a messy, semi-coherent film that struggles to express its complex ideas in an audience-friendly manner, but the ideas are there and the action scenes in between are the best the trilogy ever had. Its sequel just turns it all into nonsense.
Posted by Grant at 6:30 PM