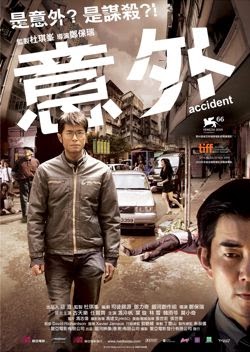 The Brain (Louis Koo) is an anonymous assassin who leads a team of operatives. Together they develop and enact elaborate murder schemes for hire: schemes that are carefully constructed so as to appear like freakish but readily explained accidents. When one of the Brain’s team is unexpectedly killed, and the police begin investigating his apartment, he becomes paranoid that he has become a target for murder himself.

Accident is a short, sharp, and immensely stylish thriller. It is directed by Soi Cheang (Motorway) and produced by Johnnie To via the latter’s Milkyway Image production company. There is a particular aesthetic to Milkyway films. They have a certain stylistic sheen and slow, methodical pace. Accident is no different, and slots in seamlessly among To’s own directorial works.


Cheang does a marvellous job of cranking up the paranoia. The Brain might be getting targeted for assassination. On the other hand he may be so immersed in his own world of Rube-Goldberg-esque deathtraps that he can no longer see genuine coincidence for what it is. The film keeps the audience guessing right up to the final scenes, and in the meantime we have to watch the character side inexorably towards an emotional breakdown. It’s an oddly tense and quiet film. Where other Hong Kong director would be tempted to direct this kind of story with bombast and overt emotion, Cheang keeps everything very subdued and buttoned-down. It is probably good that the film is as short as it is – less than 90 minutes – because this kind of constantly rising tension couldn’t be sustained for much longer.

Louis Koo gives a strong and deliberately understated performance as the Brain, filling the character with silent calculation and pent-up frustration. The supporting cast is filled with Milkyway regulars, including Lam Suet, Michelle Ye and Richie Jen, all of whom give typically strong, slightly idiosyncratic performances. A particular standout is Shui-Fan Fung as Uncle, the oldest member of the Brain’s team who appears to be suffering from dementia.

Short, to the point, and stylishly constructed, Accident is a Hong Kong thriller that is well worth tracking down.
Posted by Grant at 5:07 PM