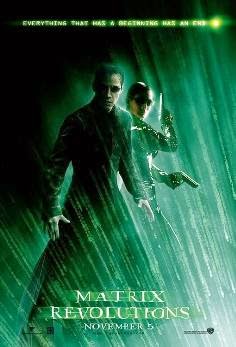 The Matrix trilogy wound up with The Matrix Revolutions, released simultaneously around the world in the widest motion picture release of its kind. The Matrix Reloaded had managed to become one of the highest-grossing films of all time, so studio expectations were high. Reloaded had divided viewers, however, so it's safe to say that audience expectations were more ambivalent. I remember that back in 2003 I was personally enormously excited, having found the ideas and the foreshadowing in Reloaded to be brilliant stuff - and I couldn't want to see how it would all be resolved.

I honestly don't think I've been more disappointed with a film in my life. I absolutely loathed Revolutions, and while I've rewatched the other two films several times in the past decade or so I've only rewatched the third film maybe once or twice. Given the space of years I still think it's a terrible movie, but I now find it a lot easier to pinpoint exactly why it doesn't work.

I mentioned in my review of Reloaded how one of Revolutions' big problems is that it fails to resolve most of the issues and twists the earlier film set up or foreshadowed. While it seemed obvious at the end of Reloaded that the assumed 'real world' was clearly another level of the Matrix, Revolutions simply asks the audience to accept that Neo can now psychically control machines in reality. There's no explanation for it, and it doesn't match anything else we see or hear in the other two movies. The Wachowskis simply demand we accept that the science fiction movie is now also a fantasy and move on.

Agent Smith's takeover of the Matrix, and his subsequent victory-turned-defeat during the film's climax, is never sufficiently explained within the film. It's possible to develop theories, and draw lines from point A to B and so on, but it's all guesswork - the viewer could easily be wrong. Whatever's actually going on in this movie, the Wachowski's aren't telling.

The bulk of the film is taken up by the siege of Zion, and it's here that the film's other major flaw becomes apparent. We've spent two films following the stories of Neo, Trinity and Morpheus, and they are far and away the characters with whom we're most engaged. The siege of Zion doesn't feature any of them, and instead we spend the bulk of the film watching characters we've never been properly introduced to have angry gun battles with visual effects. It's almost impossible to care about what's going on, because the human element is gone. Everyone speaks in cliches. Zion defends itself with giant robot suits, not for any discernable reason and certainly not a sensible one. The siege sequence simply goes on and on to interminable lengths. Meanwhile Morpheus is racing back to the rescue, but he doesn't even get to pilot the ship: that job goes to Niobe, a character viewers have barely seen - unless they played the Enter the Matrix videogame. We barely see Trinity do anything at all, and even when she does it's only another ten minutes before she dies.

The entire film feels like a messy and incoherent shell. There are ideas that could work, but they're expressed insufficiently. There are action scenes that should be exciting, except this time around they feel perfunctory and weakly staged. This is supposed to be the grand climax of an epic trilogy, except it's written with so little detail that it's genuinely difficult to understand what's going on. The what isn't in question, but the how and the why are in very short supply.

To be honest more than anything Revolutions feels less like a movie and more like an episode of a television series. It came out a few months after Reloaded, and certainly it doesn't so much start as just keep going. And going. And then there's a big robot fight. And stuff. Anyhow. Oh dear.

As a whole The Matrix trilogy feels like a visionary and grand experiment, that starts off tightly constructed and bold and gradually collapses under the weight of too many clever ideas. The original film expressed complex ideas through action and smart dialogue. The second film struggled to express itself outside of lengthy exposition-heavy bouts of academic language. The third film fails to properly express itself at all. There are some lovely moments, and visually appealing photography, and to be honest Keanu Reeves delivers a genuinely strong performance, but in the end... is this all there is? Is this all the Wachowskis had to say?
Posted by Grant at 9:46 AM