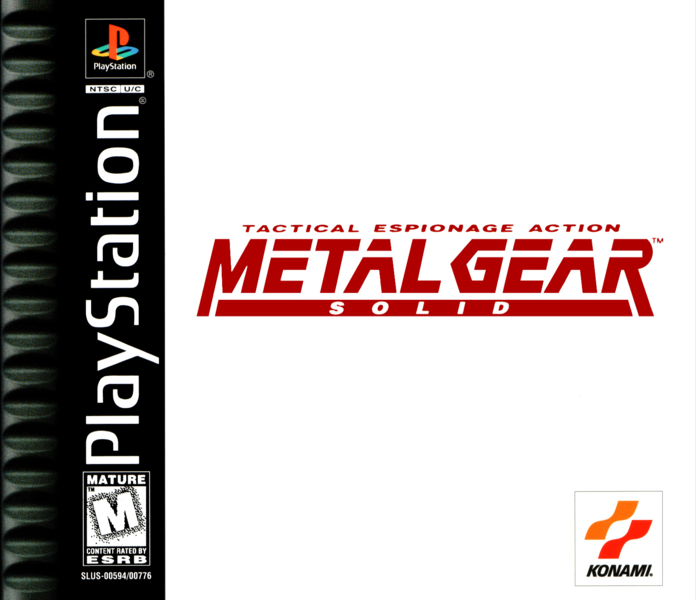 In 2014 Sony's PlayStation turns 20 years old. It was a revolutionary console, exploding the Nintendo vs. Sega paradigm that had dominated videogaming for a decade and its effects can still be felt today. PSX20 celebrates the 20th anniversary of Sony's Playstation videogames console by counting down my 20 favourite videogames for that platform. These aren't necessarily the best PSX games ever made, but they are the ones I liked and played the most. Today we've reached #2, Konami's Metal Gear Solid.

Metal Gear Solid (1998) is a stealth-based action game in which the player controls secret operative Solid Snake as he infiltrates a nuclear weapons facility to disable or kill a group of super-powered terrorists. It always struck me as an odd game. Odd because it combines elements that are startlingly realistic for a late 1990s videogame with elements that are deliberately weird, silly or self-referential. Odd because it's characters are so bizarrely drawn and named. Most of all it's odd because when the story and the characters are taken all together it's pretty much the most tortured and ridiculous narrative imaginable, and yet its characters treat it all with a deadly seriousness.

Despite the stylish 3D visuals, the gameplay of Metal Gear Solid is remarkably simple. The player controls Snake though a series of rooms and corridors, and ensures he remains hidden from view as various guards and mercenaries patrol them. Running and gunning like a first-person shooter is going to get Snake killed in very short order, so it's ultimately a rather tense game of stealth, taking territory a few metres at a time in a bid to reach the various end-of-level bosses.

One of the things that made the game so entertaining to play was its distinctive identity: the aforementioned ridiculous plot and characters, the deadpan delivery, and the deliberately consistent graphics. It would have been easy to make the game's various cut scenes more attractive, but by rendering them in the same engine as the main gameplay the entire game gained one cohesive and unified look.

Solid was the third game in the Metal Gear series, and was followed by several more sequels and spin-offs. Future versions become more technically efficient and visual attractive, but it's arguable that the franchise gameplay peaked right here. It's an immensely playable game: addictive, dramatic, over-the-top and just utterly remarkable in every respect.
Posted by Grant at 9:05 PM