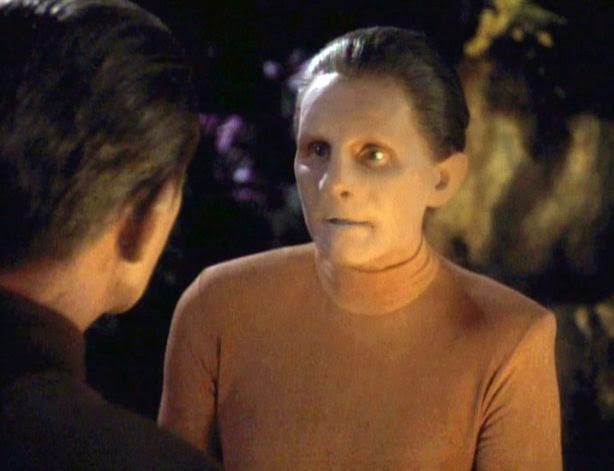 Odo has been reunited with his own people, the Changelings. While he attempts to learn their ways and re-integrate into their society, Kira begins to have some questions about what the Changelings' motives really are. Meanwhile Sisko and his crew return to Deep Space Nine to discover the Dominion have made contact with the Federation in their absence, and that a peace treaty is being negotiated. How much is the Federation willing to sacrifice to keep the peace?

"The Search, part 2" is a rare phenomenon in Star Trek: the second part of a two-part story that's actually better than the first. Usually it goes the other way around: part 1 is able to set up all manner of shock climaxes and cliffhangers, and it's up to part 2 to stagger around picking up the pieces and making sense of it all. Instead "The Search" moves quite smoothly from one installment to the other, and its cleverest ideas and most surprising moments are all actually here in the second half.

An enormous risk is taken in this episode, since the bulk of the plot - the return to Deep Space Nine, the treaty with the Dominion, the destruction of the wormhole - never actually happens. In the final scenes we learn that Sisko and his crew have been in some kind of computer simulation ever since the Jem'Hadar ambushed them in part 1. It comes this close to being an "it was all a dream" tedious plot twist, but veers away at the last minute due to a masterstroke of writing. That masterstroke is making Odo's people the Founders.

It's a stunning idea, and perfectly executed. For the last two seasons we've had the odd episode devoted to Odo, and his sad longing to be reunited with his own kind. For the whole of Season 2 we were teased with references to the mysterious and all-powerful Dominion, and their elusive rulers known as the Founders. Now in one sudden moment we discover they're the same thing. It's not simply that it's a great plot twist, although it certain is that. It's that it's a twist that generates an overwhelming amount of drama. Odo is now forced to side with his friends against his own species. Starfleet is likely to question his loyalty, or how much he can be trusted.

Above all we're now firmly in uncharted territory for Star Trek. We've seen Cold War-style conflicts between the Federation and the Klingons, or the Romulans, but these were single-species monocultures. In the Dominion we basically have the dark reflection of the Federation: a massive assemblage of united planets and civilizations united under a common banner, only unlike the peacable and democratic Federation the Dominion rules in secret using the Vorta as a carrot and the Jem'Hadar as a stick. The scale of the challenge facing Commander Sisko, as the lead officer on the border between these two superpowers, is unprecedented. Not even the Borg seemed this big a deal.

Two great episodes in a row kicks Season 3 off in fine style, with a quality ratio of 100%. Let's see how long it lasts.
Posted by Grant at 5:01 PM