Doctor Who: "The Velvet Web" 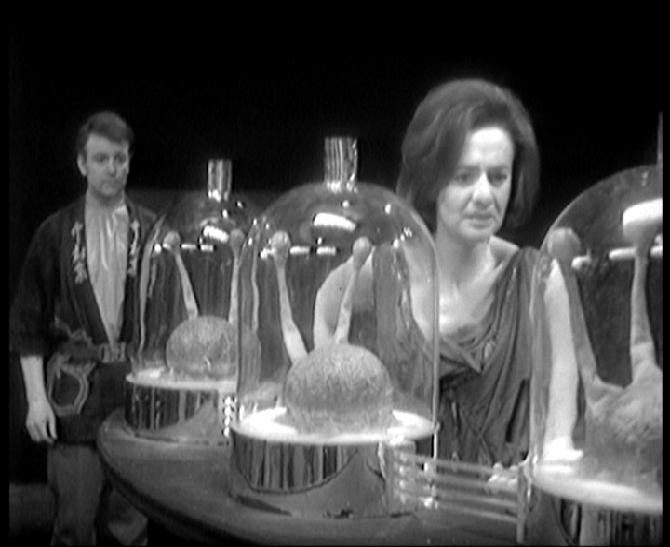 The TARDIS team have been dispatched, with the use of teleporting travel dials, to various points around the planet Marinus. Their mission is to collect the four keys to the Conscience of Marinus before the evil Voord invade and lay claim to the Conscience for themselves. The first stop: the idyllic city of Morphoton, where the Doctor, Ian, Barbara and Susan are invited to relax in the lap of luxury. Only something is wrong: Barbara can see the city for the decayed ruin it really is - even if her companions can not.

What we have in "The Keys of Marinus" is a six-part quest story, and as a result each instalment has the chance to tell its own self-contained 25-minute story. After a weak and derivative set-up in "The Sea of Death", "The Velvet Web" takes its premise and runs with it marvellously. The result is an episode that's much more inventive and engaging, and certainly the creepiest episode of Doctor Who thus far.

It's hard to believe this episode and the last shared the same director. John Gorrie seemed to oversee a rather sloppy and haphazard production with episode 1, but here the results are much slicker and actively creative. The scenes in which Barbara realises the disgusting reality of Morphoton are very cleverly staged, with the camera acting as Barbara's own point-of-view and her companions talking to her directly down the barrel of the lens.

The episode is also a wonderful little horror story. Once it becomes clear that the Doctor, Ian and Susan are under some form of mind control, it becomes a horribly paranoid experience for Barbara. Her friends disbelieve her, then abandon her, then start to actively help Morphoton's inhabitants in hunting her down. They happily sit down in-between, dressed in rags, to drink dank water and feast on rotten food.

At the episode's climax the true power behind Morphoton is revealed: atrophied little brains in jars that star malevolently at Barbara with eyes on stalks. They're the third alien monster for Doctor Who, visually distinctive and vastly superior to the wetsuit-wearing Voord. It's a pity this was the only appearance for the Brains of Morphoton, because they're wonderfully creepy and have a lot of promise for further stories.

At the episode's conclusion, the Doctor uses his dial to jump ahead to search for the fourth key. His companions head for the second, and arrive in a mysterious jungle...

This is the 16th good episode of Series 1, out of 22 thus far: the quality ratio correspondingly shifts up a little to 73%. Next episode: "The Screaming Jungle".
Posted by Grant at 9:59 AM