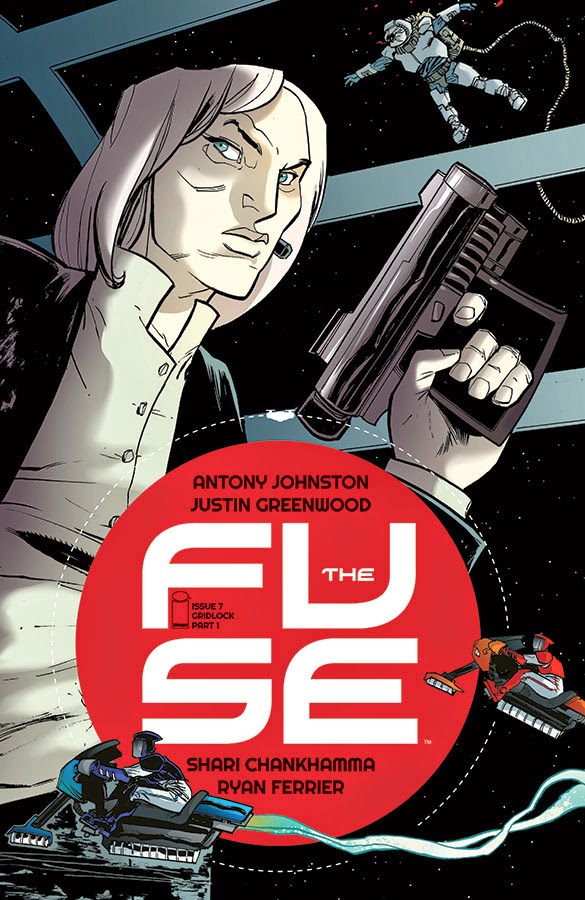 Pretty much my favourite new comic book this year is Antony Johnston and Justin Greenwood's science fiction police procedural The Fuse. It follows two police detectives assigned to a large orbiting space station above the Earth. The first six issues, "The Russia Shift", are available in trade paperback already and I strongly recommend you pick it up and give it a read - assuming you haven't already. This is the sort of book that deserves to be on the Hugo ballot. It's smart, engaging, and uses science fiction trappings and concepts to give a fresh lease of life to the procedural genre. Plus I really like the two lead characters: Ristovych and Dietrich.

After a short hiatus the book returned this week with issue #7, and the beginning of the second story arc: "Gridlock". It turns out there's a highly dangerous and illegal sport known as 'gridlocking', in which young spacesiders drag-race along the surface of the station using magnetic bikes. When the body of the most popular racer is found outside the station, riddled with holes from a meteoroid burst, Ristovych and Dietrich are called in to investigate.

This is a faultless comic book. The characters are cleanly drawn. Information is provided in a contextual manner, so the story is never slowed down for unnecessary info-dumps. Greenwood's artwork is distinctive and likeably angular. On top of all of that, there's a genuinely good police mystery to be solved. Trust me: give this book a chance. I honestly think it's the comic of the year, (5/5)

The dead are rising from their graves in Smallville, which is obviously a huge problem for the people living there but is also a small problem for me. You see, I really don't enjoy it when superhero stories cross over into horror tropes like this. I'm not saying good stories can't be generated by combining the two, just that when they're combined my interest levels generally fall through the floor. It's simply not my thing. There is some stuff worth reading here: I like Lana and Steel's budding relationship an awful lot, as well as her damaged friendship with Clark in the wake of the "Doomed" crossover. It's good stuff - just partly not to my taste. (3/5)

Arkham Asylum has collapsed in on itself. The surviving inmates, including Zsasz, Clayface and Mr Freeze, are charging out en masse. The police are closing in on Batman. Spoiler is ambushed by Hush. Alfred teams up with Bane- wait, what? Yes, this is indeed the weirdest superhero team-up of the year, as professional valet Alfred Pennyworth joins forces with muscle-bound terrorist Bane to escape the ruins of Arkham and the demonic creatures that lurk beneath the wreckage. It's fast-paced, kind of nuts, and exactly the sort of thing I like to read in a superhero book. Batman Eternal is really hitting a high quality mark in recent weeks. (5/5)

After two promising but shaky issues, Cloaks really kicks it up a notch with issue #3. The story suddenly feels a lot more clear and readable, the characters seem more engaging and well-drawn, and the plot rattles along at a fierce pace. It's the sort of issue that kicks this book up from an entertaining diversion to a genuinely brilliant must-read comic. It's a mixture of stage magicians, con artists and secret agents that could really have legs in the long-term. If the fourth and final issue continues at this pace, I'm going to be demanding a follow-up - or even a regular monthly. This stuff is really good. (4/5)

Batman is racing against the clock to find a cure when a viral outbreak at Gotham International Airport starts to age everyone to death. This has been a great little two-parter, with an exciting location and an interesting challenge. If there's a criticism it's that this second issue feels a tiny bit rushed, but I think that's preferable to dragging the storyline out for another month when it probably doesn't need it. An unexpected cameo by Dick Grayson gives the issue fresh territory to work over, although I honestly don't remember Dick being this brutally violent - is this the norm for his current solo title? John Paul Leon's artwork is nicely gritty and realistic: I could happily see him illustrate one of the Batman titles on an ongoing basis. (4/5)

I was complaining only last column that Titan's Doctor Who comics felt a little too safe and generic. To prove me wrong, here comes an issue that not only manages to tell the first part of an outstanding Doctor Who adventure but also manages to tell it in a manner that specifically works for comic books and not television. Nick Abadzis uses new companion Gabby's illustrated journal entries to enrich and expand what could be a standard science fiction story with heart, emotion and humour. Altogether it's an outstanding issue, and an absolute must-read for Doctor Who fans. This is the best issue Titan has published to date. (5/5)

I was cautiously optimistic about Gotham Academy following its first issue. Now, after its second, I remain cautiously optimistic. This is basically Batman-meets-Harry Potter, with a group of disparate teenage protagonists, a creaky old boarding school, secret rooms, occult whisperings, and rumours of ghosts. Karl Kerschl's vaguely manga-esque artwork accentuates the breezy, all-ages nature of the book. Becky Cloonan and Brendan Fletcher have populated the book with vibrant, likeable characters - all that's needed now is for the book to really find its feet and its own clear identity. For now it continues to look very promising. (4/5)

While the Justice League recover and relax over in future Camelot, super-villain Terry goes about generating a new set of back-up villains: clones of Bane, Mirror Master, Sinestro and others. The most exciting part of this issue is it's final page, which is for certain DC fans tremendously exciting - but as the comic's own front page says, 'don't look at the last page until you've reached the end of the story'. This is a solid, entertaining book that's really not getting much attention. Howard Porter's art for one is pretty great. (3/5)

Two issues into DC's re-envisaging of intergalactic bounty hunter Lobo, and I'm pretty much ready for them to go back to the original version. I've never been the biggest fan on Lobo to be honest, but at least the big hulking ugly version has a personality: this newer, younger looking model just comes across as bland by comparison. There's nothing specifically wrong with this issue, but it's hardly a must-read either. It just sort of sits there, like a mediocre Chinese combination served from a food hall bain-marie. (2/5)

Kurt Busiek has always been a solid and dependable stalwart of the comics industry. He writes a slick, enjoyable superhero comic like nobody's business, and his creator-owned book Astro City is utterly brilliant. Now he's kicking off his new fantasy book Tooth & Claw, with artist Benjamin Dewey. It's a very promising extra-length first issue, featuring wonderful anthropomorphic animals rendered in an unexpectedly realistic style. There's great world-building, foreshadowing and characters here: any fantasy fan worth their salt should be picking it up. This was an immensely satisfying read. (5/5)

It's difficult to read this comic book without becoming immediately entranced by Stan Sakai's beautiful clean artwork: presented in black and white, it allows for every pen stroke to stand out. His work seems so fluid and effortless, almost gestural in places. It also makes for an immensely readable comic book. The storyline is ridiculous - tentacled aliens in giant tripods lay waste to a feudal Japan full of anthropomorphic animals - but Sakai treats it with a deadly seriousness that's convincing enough you just go with it and enjoy the ride. (4/5)

We seem to have slipped into a comfortable formula with this book: a bit of story to move the book forward as a whole - in this case our leads running for their lives from alien carnivores - and a bit of backstory to flesh out one of the leads - in this case big, quiet Ben. I particularly like that all of these flashbacks appear to take place on one night: the school play one year before the main storyline began. It's decent stuff, and I'm very happy that the main plot isn't being entirely forgotten among all of the flashbacks. (3/5)