Star Trek: The Next Generation: Season 3 in review 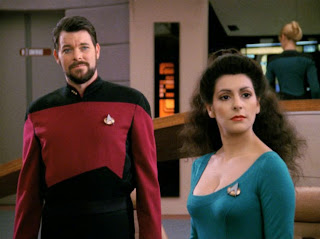 Traditional wisdom has always been that Season 3 was the year when Star Trek: The Next Generation 'became good'. Looking back with nearly 25 years of hindsight, and I've discovered that the perceived wisdom is mostly true. The series certainly gets a lot better in Season 3, but it takes the better part of the season to shake out the kinks and really set the series up to succeed. It ends in much better shape that where it began, so I'm actually quite keen to see how Season 4 goes.

One thing that particularly struck me was that this was the season where The Next Generation stopped trying to ape the original Star Trek and instead went forward on its own merits: it's a softer, more ensemble-based dynamic: much as the fans liked the entire crew of the original series, the focus in terms of screen time and character development was almost entirely on Kirk and Spock - and to a lesser extent McCoy. Here everyone gets plenty of time to shine and develop (unless your surname is Crusher, then you're likely to still be a little short-changed).

Obviously the biggest influence on the series in its third year was Michael Piller, who came in to head up the writer's room and forced a lot of much-needed changes. He worked with two rules: each episode had to be about something, and each episode had to develop one of the regular cast. The rules we're always followed, but they were for the most part and helped give the characters some badly needed refinement. Riker and Worf both benefitted the most, while Picard gained nuance. La Forge continued to be a problem, character-wise, as if the writers couldn't quite get a handle on him. Attempts to do so - like "Booby Trap" - seemed to inadvertently make the character less likeable. Other key Trek writers like Ronald D. Moore and Rene Echevarria made their debuts. Basically this season is where we get to watch 1990s Star Trek get born.

So what were the best episodes? To be honest we're comparatively spoiled for choice this season, since two of the three best episodes to date were broadcast. In order, my top picks would be:


Of course as I noted above, while this season marked an improvement over Seasons 1 and 2, it still was far from perfect. Here are the five episodes I'd strongly recommend avoiding (not including "The Most Toys", which actually contains a lot of good - it's just hampered by Jewish stereotyping):