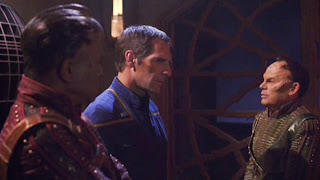 With his arrival at the Xindi Council planet, Captain Archer finally has his chance to plead humanity's case and avert disaster. While at first it appears that the Xindi will postpone the release of their superweapon, it soon becomes apparent that the Council is about to split - the Arboreals and Humanoids on one side, the Reptilians and Insectoids on the other, and the Aquatics in the middle. Meanwhile the Guardians continue to manipulate events from the future.

Last episode's time travel shenanigans out of the way, Enterprise is now free to return to the season's ongoing story arc. This is a critical episode, and thankfully it feels like one. It begins with tense political posturing and ends with the outbreak of civil war among the Xindi. Meanwhile T'Pol leads a mission into one of the Guardians' spheres to retrieve badly needed evidence of their true plans.

In the middle of all of this is the death of Degra (Randy Oglesby). He's had an intriguing character arc over the course of the season, starting off as a seemingly two-dimensional evil scientist and finishing it as a well-rounded and sympathetic ally. He has had to put so much at risk in following Archer, to the point of murdering a shipful of Reptilians in order to preserve their chance of speaking to the Council. That decision catches up with him this week, as does the point of Reptilian leader Dolim's knife. It was not an unexpected twist in the plot, but a well-played and very sad one.

The strain of the mission is really beginning to show as well. T'Pol continues to struggle with her emotions. Trip struggles to reconcile fighting the Xindi yesterday with working with them today. Reed struggles with the rising body count - another MACO gets killed investigating the sphere, and he clearly feels the weight of that. Archer is just beginning to look irritable and exhausted: he's worked so hard and he's so close, and even at the brink of victory the Reptilians still manages to statch his goal away from him.

I want to like the Reptilians, and certainly Scott MacDonald is doing a solid job as Dolim, but they just look too much like the villain from Galaxy Quest for me to treat them seriously. When you can't immediately tell the difference between a thing, and a parody of that thing, you've got some pretty serious problem. Did no one in the Star Trek production office see Galaxy Quest? Did nobody notice the similarity? I'm finding it genuinely silly and distracting.

All told, this episode serves one purpose: to get the series from the build-up to the climax. It does that very well, and the cliffhanger ending makes me very keen to find out what happens next. 13 good episodes out of 22 gives Season 3 a quality ratio of 59%.
Posted by Grant at 9:40 AM