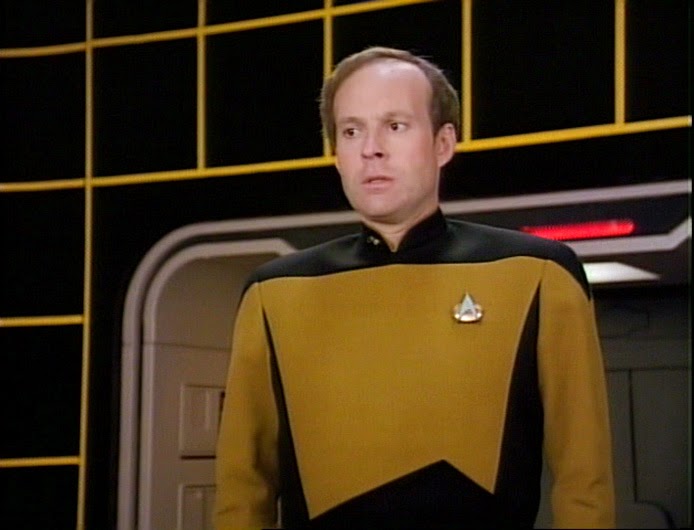 In "Hollow Pursuits", the Enterprise is beginning to suffer systemic failures across the ship. One of the engineers tasked with locating the cause of the problems is Lieutenant Reginald Barclay (Dwight Schultz), an introverted and awkward technician who is secretly meting out his frustrations with the command crew inside the ship's holodeck.

This is an unusual episode, because it breaks one of the key demands of television drama: it's not about the leads. Any given TV drama will generally have a regular cast, and it's a given that each episode will be focused on one or more of those characters. That isn't the case here. While several members of the regular cast get solid amounts of screen time - La Forge, Troi, Riker and Wesley, for example - the focus is distinctly on Lt Barclay. He's a guest character, played  by Dwight Schultz (The A Team). We've never seen him before, and he'll made sporadic appearances in The Next Generation and Voyager over the coming years.

So writer Sally Caves has broken a rule, but significantly she's broken a rule to tell a story that otherwise couldn't be told. Barclay's position as a junior officer and engineering technician means that for the first time we get to see what the Enterprise command crew are like to their subordinates. We see an entirely new side to Will Riker, who's a forceful and stern commander that sits in sharp contrast to La Forge's more collaborative, easy-going method. Through Barclay's holodeck simulations we get to see parodies and perversions of the regular cast, and the actors themselves get some unexpectedly fun stuff with which to play around.

Dwight Schultz gives a great performance as Barclay, both pathetic and sympathetic at the same time. We all know a Barclay. Some of us are Barclay. He treads a narrow path in this episode, because while his holodeck fantasies are invasive and highly creepy we do feel sorry for him at the same time. We may not approve of his actions, but we do want him to improve and become a better man. It's interesting that this episode has come along so quickly after "Booby Trap", in which La Forge essentially did the same thing: use the holodeck to generate and interact with perverted copies of real-life people. I found that episode fairly unwatchable because it didn't present La Forge's actions as in any way inappropriate or invasive. They do the opposite here because, with a temporary new lead character, they're able to do it without risking the integrity of the regular cast. It's what makes "Booby Trap" awful and "Hollow Pursuits" rather enjoyable.

13 good episodes out of 21 gives Star Trek: The Next Generation's third season a quality ratio of 62%.
Posted by Grant at 7:21 PM