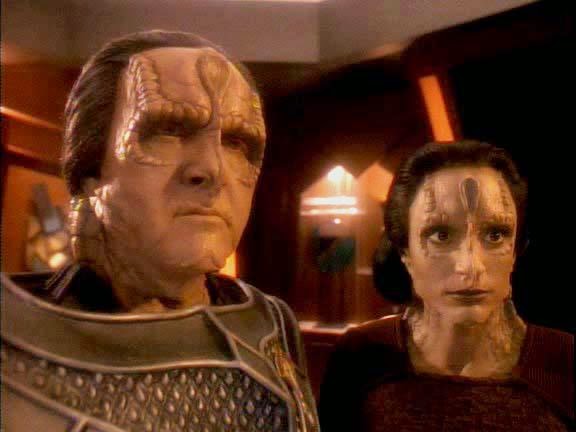 Major Kira wakes up on Cardassia Prime. When she looks in the mirror, her face is that of a Cardassian woman. She is informed that she is a secret agent retrieved from deep cover, and was never a Bajoran named Kira Nerys at all.

It's a very provocative and bold premise for a Deep Space Nine episode: taking a hardened Bajoran freedom fighter who's haunted by her long fight against the Cardassians and telling her that she was actually a Cardassian all along. It generates drama from the get-go, and interrogates and changes character, and it would be one of the best ideas ever in the series were it not for one small problem. We know it's a lie.

I mean, come on. We know it's a lie. By the time this season started we had watched nine seasons of The Next Generation and Deep Space Nine and knew what to expect. It might generate a cool moment to have Kira stare into a mirror and see a Cardassian looking back, but we know it's not going to stick. We know that before the 42 minutes are up Kira will be a Bajoran again and some unlikely Cardassian scheme will have been uncovered.

Imagine if they had possessed the boldness to actually stick with it. Kira's defined by her hatred of the Cardassian occupation - what if she discovered she was precisely what she hated? How could she continue working for the Bajoran government? Who would trust her? How would she reconcile her old life with her new one. There's a wealth of story opportunities in that, and a staggering amount of imagination - but of course it was never going to be.

As it stands this is a beautifully performed episode, and stands very much as a companion piece to Season 1's "Duet". That episode saw Kira come to understand one good-hearted Cardassian man. Here she encounters another, and each time her racism towards them is chipped away by another inch. It might be the brave storytelling that it could have been, but it's still brave - and richly nuanced as well. It is Nana Visitor's episode and she does a great job of it.

It's a great episode for Garak as well, with the self-avowed "plain and simple" tailor finally forced to out himself as a pretty well-informed member of Cardassia's spy network. Andrew Robinson is marvellous in this role, and it's great to see the production team use him so judiciously: regular enough to be an appealing presence, but not so regular that he is overused.

Four good episodes out of five leaves Season 3 with a quality ratio of 80 per cent. It's looking like this series gets better and better with each season.
Posted by Grant at 11:25 PM