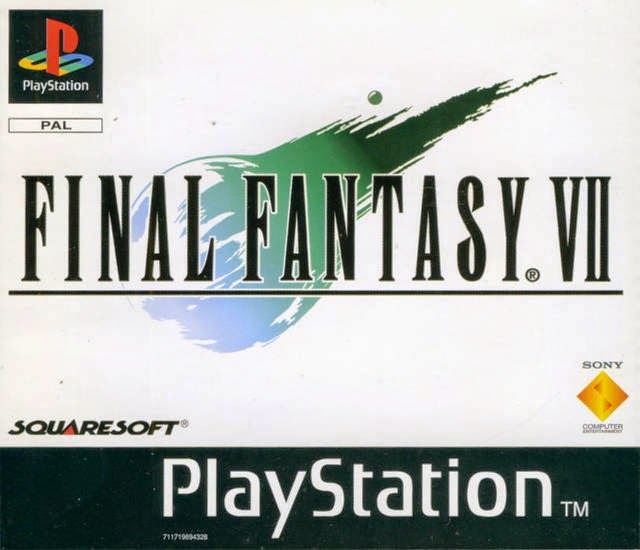 In 2014 Sony's PlayStation turns 20 years old. It was a revolutionary console, exploding the Nintendo vs. Sega paradigm that had dominated videogaming for a decade and its effects can still be felt today. PSX20 celebrates the 20th anniversary of Sony's Playstation videogames console by counting down my 20 favourite videogames for that platform. These aren't necessarily the best PSX games ever made, but they are the ones I liked and played the most. Today we've reached #1, my all-time favourite PSX title: Squaresoft's 1997 role-playing game Final Fantasy VII.

It's a very predictable choice, I know. The thing is: it's predictable for a reason. Final Fantasy VII seems amusingly dated these days, with its numerous advances and innovations long-since superceded or improved upon. At the time it felt genuinely revolutionary.

Final Fantasy had kicked off as a last-ditch attempt by a failed production company to have a hit game: hence it's name, a bleak joke that it was in all likelihood Square's final shot at success. It was a breakout hit on the Nintendo Famicom, and two sequels on the Famicom and three on the Super Famicom helped cement Final Fantasy as one of the premier franchises in Nintendo's stable. Then the time came to make Final Fantasy VII. Square planned to take advantage of the CD-ROM technology promised by Nintendo's forthcoming disc-based SFC successor. It would enable better sound and in particular the use of pre-rendered video sequences. Then, quite suddenly, Nintendo parted ways with their CD-ROM partner Sony, to focus on a third cartridge-based console (ultimately released as the Nintendo 64). Nintendo assumed Square would revise their plans. Instead Square jumped ship to Sony's PlayStation and gave Sony their biggest weapon in the fight for the loyalty of Japanese gamers.

The pre-rendered CGI scenes seem charmingly primitive now, as does the game's whole-hearted attempts to create characters with unprecedented depth and resonance. At the time it felt like nothing I had played before. I found myself emotionally invested in the characters. I cared about what happened to them. When one of them famously dies at the climax of the first disc (it was a game so large, comparatively speaking, that it came on three discs), I was genuinely affected by it. When the protagonist subsequently has an emotional breakdown, I felt completely flummoxed: are games supposed to do this? Are our heroes supposed to be this emotionally fragile?

Final Fantasy VII also made very clever use of scale. You begin the game confined to a city, then as the hours of gameplay pass you find yourself able to explore a whole continent outside. Then the ocean beyond, and then an entire world. It cleverly gets bigger as the epic nature of the story unfolds. The game was also unexpected in that it shifted genres: the first six games had all been firmly rooted in the fantasy genre, whereas VII introduced many science fiction elements that muddied the waters and made a more unusual sort of role-playing game.

It's a beautifully designed game, boasting wonderful characters and settings by Tetsuya Nomura. The music was stunning for its time as well. Even today it seems a wonderful blend of strong gameplay, beautiful sound and design, and an interesting story. Its director, Yoshinori Kitase, was responsible for several of Square's best games: not only this, but Final Fantasy VI, Chrono Trigger and Final Fantasy X. I think this is very probably his best work (though Chrono Trigger, made for the SFC and SNES, gives it some pretty strong competition).

The PlayStation heralded an entirely new age for videogames, so distinct from what preceded it that you can pretty much divide the whole history of console gaming into two halves: before the PSX and after it. Through games like this, or Metal Gear Solid, Silent Hill and Resident Evil, the sorts of games we played and the position they held in popular culture, shifted irrevocably. As the cliché goes: things were never the same again.
Posted by Grant at 5:13 PM