The Little Mermaid: 25 years on 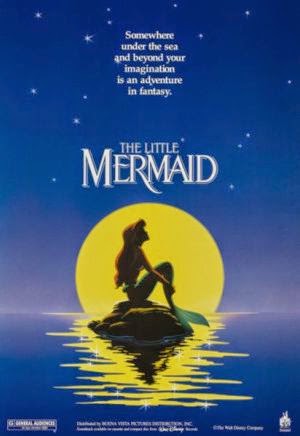 25 years ago today Walt Disney Pictures released The Little Mermaid. It was the company's 28th full-length animated feature, but also one of their most important. Disney had struggled to make the leap from the 1960s to the 1980s. During the 1970s the company relied on inexpensive family films and comparatively cheap animated features. By the end of the decade, however, that strategy seemed dead in the water. Star Wars had radically changed the film landscape, and while the other studios jumped at the chance to make more sophisticated and mature feature films Disney found itself stuck in a rut with rapidly declining box office.

Attempts to cash in on the new Hollywood aesthetic failed entirely, with The Black Hole, Tron, Return to Oz and several other live-action films all flopping to one degree or another. Attempts to revolutionise the studio's animated offerings resulted in the disastrously unsuccessful The Black Cauldron, which took years to make and was entirely dismissed by audiences worldwide. Two young animators, Ron Clements and John Musker, developed a much cheaper animated feature titled The Great Mouse Detective. When it turned a small profit Disney assigned them to a slightly more ambitious feature: The Little Mermaid.

The Little Mermaid did what earlier Disney features had not: it deliberately looked back to the classic fairy tale-inspired films of the 1940s and 1950s and re-imagined them for a late 1980s audience. The film was an unashamed musical, was drawn liberally from the Hans Christian Andersen children's story, and followed the 'princess' model that had succeeded so many times in the past for Disney. Clemens and Musker used the skills they developed on The Great Mouse Detective, and benefitted from a raft of new European animators who had worked on Disney's Who Framed Roger Rabbit a year earlier, and made an animated film that reeked quality and entertainment value.

The success of The Little Mermaid kickstarted Walt Disney Pictures from a tired also-ran in the mid-1980s to the world's most successful film studio in the 1990s. It's still at the top of its game today. In particular The Little Mermaid launched the "Disney Renaissance", a run of 10 outstanding animated features that broke box office records and transformed animated films from a childhood distraction to a mainstream Hollywood blockbuster genre. Together these 10 films grossed more that $3.4 billion dollars in cinema, and continue to rake in profits through licensind deals and home video.

I reviewed The Little Mermaid a while back, noting "it remains a wonderful film: fast-paced, breezy and beautifully animated. Ariel in particular is a wonderful creation, with numerous quirks and individual touches that bring her life far beyond what you'd normally expect from an animated heroine. Menken and Ashman's beautiful songs introduce a new contemporary Broadway style to Disney's films that continues to work well for the company." That opinion hasn't changed. This is a wonderful film, and a historically significant one, and it's well worth celebrating its anniversary today.
Posted by Grant at 5:07 PM