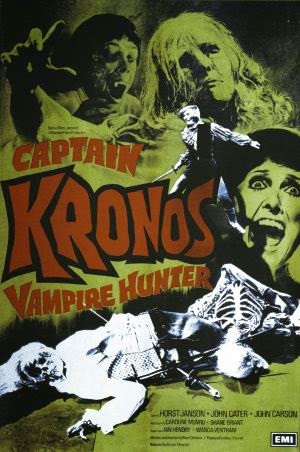 By the early 1970s the UK's horror movie stalwart Hammer Film Productions was struggling to retain its market share. Faced with increased competition from overseas and a growing sophistication among competiting horror movies, the company was forced to think out of the box and experiment with its long-tested formulas. One of these more experimental productions was Captain Kronos: Vampire Hunter.

Hammer reached out to television writer/producer Brian Clemens, who had found enormous success writing and producing ITC's The Avengers. He wrote, produced and directed Captain Kronos as a new kind of Hammer film, less concerned with the horror elements and more with action and adventure.

It was intended to be the first film in a whole franchise of Captain Kronos movies, but poor box office and Hammer's continued financial struggles stopped those plans in its tracks. It now sits as a bit of an oddity, similar enough to Hammer's other films to form part of the overall range but still distinctive enough to stand out from the crowd.

It wasn't just Clemens who made the jump from The Avengers to Captain Kronos. He brought with him fellow producer Albert Fennell and composer Laurie Johnson as well, and a combination of the writing, the music and the general tone really do make the film feel more like an ITC television production than a horror movie. The film establishes a roving double act, who travel Europe in the hunt for vampires. Captain Kronos (Horst Janson) is an 18th century army veteran whose family was murdered by the undead. His companion Professor Grost is a hunchbacked scientist who helps to identify nearby vampires and provides Kronos was the tools required to slay them. It's the perfect set-up for an ongoing franchise, or indeed a weekly television series. So immediately enjoyable is the Kronos/Grost double-act that American director Stephen Sommers stole it wholesale for his 2004 fantasy film Van Helsing. Kronos does it much, much better.

Interestingly, Captain Kronos eschews traditional blood-sucking vampires for ones that suck the life energy out of their victims, leaving the corpses withered and prematurely aged. It's the little differences like this that make Captain Kronos work so well: it's both familiar and different. It's easy to imagine a raft of films in this series, each one revealing a different kind of vampire.

Horst Janson struggles a little to emote as the stoic Kronos: he's appealing enough, but it does feel like there could have been a more interesting character there had they gone with a stronger actor. John Carson is great as Grost, as is Caroline Munro as the film's token love interest Carla - she doesn't get much to do bar fall in love with Kronos, but she's got a striking screen presence and makes the most of a slim role. Shane Briant and Lois Daine are great as Paul and Sara Durward, creepy siblings who may or may not be the vampires Kronos is looking for.

Captain Kronos has understandably dated terribly: its pace is slower than you might like, and the acting is overtly theatrical and stylised. It's still wonderful entertainment though: the perfect antitode to a bored Sunday afternoon. Given Hammer's recent revival via Let Me In and The Woman in Black, I can only assume a remake is inevitable - and to be honest, not an entirely bad idea.
Posted by Grant at 9:53 AM