Star Trek: The Next Generation: "Transfigurations" 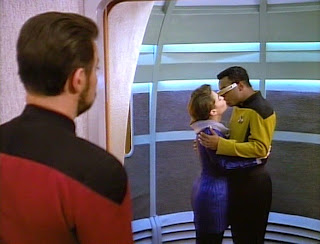 The Enterprise recovers a badly injured alien from a crashed spaceship. While his body heals with alarming speed, he has no memory of who he is or where he is going - or running from. His powers, however, have an unexpected effect on Lieutenant La Forge.

"Transfigurations" is the sort of episode that's the bane of all review writers: the average episode. There's honestly not a huge amount here that feels like it's worth writing about. It's a competent but unexceptional hour of television that doesn't trip over its own feet but doesn't excel at the same time. It actually feels a little out of place in Season 3, as if it's been held over from one of the first two seasons and is coming to the party a little late and out of fashion. Oddly enough, however, it's not a holdover at all but rather the second script for Rene Echevarria, who kicked things off with "The Offspring" and will go to shape a lot of Star Trek in the future.

The central plot - the amnesiac John Doe is rapidly evolving into an advanced energy-based form - feels by-the-numbers and reheated. It's the sort of bog-standard plot you expect to see on Star Trek. It's done as well as this sort of plot can be; I'm just not enamoured with this sort of plot.

One set of scenes does stand out, which is Worf's attempts to coach Geordi in flirting with women. It's well written, lightly played character comedy and Michael Dorn absolutely nails every punchline with his standard deadpan delivery. The episode also provides some good material for Gates McFadden as Dr Crusher. She's underused in the series in general, so it's nice when they occasionally give her a plotline of her own. She and the amnesiac John Doe (Mark La Mura) have pretty good chemistry.

So all up this is an episode that doesn't waste one's time, but really doesn't feel like it's been time exceptionally well spent. I'm on the fence, but as it's not bad as such I'm going to tip it over into the 'good' pile. 15 good episodes out of 25 gives Season 3 a quality ratio of 60% with just one episode to go: "The Best of Both Worlds".
Posted by Grant at 8:49 AM