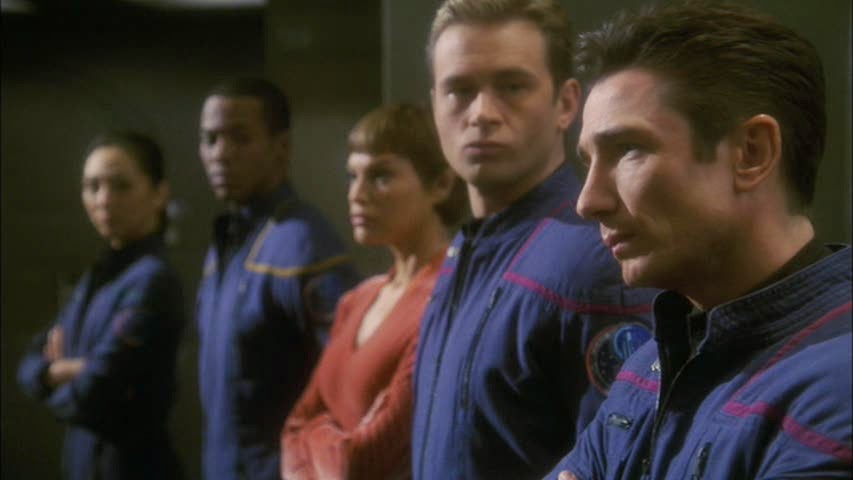 Season 3 was the year that Enterprise got put on notice, and the production team started scrabbling around in a desperate hunt to save the series. It had all started so swimmingly: Season 1 premiered with almost 12 million viewers. By the end of Season 2 those viewers had mostly wandered off to watch other things, and Enterprise struggled to hit four million viewers a week. UPN demanded a shake-up, and so in the Season 2 finale the writers had Earth hit by a devastating attack: a prototype super-weapon built and launched by the mysterious Xindi to wipe out the human race. The Enterprise was dispatched to meet and negotiate with the Xindi, and to prevent their main super-weapon from being unleashed. It was basically Space Battleship Yamato: one ship on a year-long quest to save the planet Earth from destruction.

Now clearly this wasn't the first time Star Trek had attempted a story arc: the back-end of Deep Space Nine's final season was almost entirely one big storyline, culminating in an epic ten-part finale. This was a whole season, however, and represented a pretty big leap of faith by producers Rick Berman and Brannon Braga. High risks, but potentially a big reward.

The reward, to be honest, never came: viewing figures slipped still further to an average of 3.3 million. Despite their best efforts, audiences simply weren't interested in Enterprise. They weren't even interested when UPN changed the series title to Star Trek: Enterprise - as if the reason people weren't watching was because they hadn't realised a science fiction series about a starship named Enterprise with a Vulcan science officer wasn't Star Trek.

To be honest I think the biggest creative error Enterprise made in its third year was that it didn't properly commit to its arc. It needed to either go all in with a 24-episode serial, or abandon the idea and stick with self-contained episodes. The advantage of the former is loyalty: viewers tune in week after week because they get addicted to the story like a soap opera. The advantage of the latter is being open to new viewers: you don't need to have seen last week's episode to watch the show. By charting a course somewhere between the two, Enterprise got the worst of both worlds. It was serialised enough to form a challenge for new viewers, but sporadic enough to make it difficult for regular viewers to get properly hooked into the story arc. It's easy to see that in retrospect, of course: it's a shame no one realised it at the time, since the seeds for the show's cancellation are definitely sown in Season 3. Anything done on the creative side in Season 4 was simply rearranging deckchairs on the Titanic.

At any rate, were I to pick my five favourite episodes of Season 3 I would go with:


Conversely the real stinkers of the season were probably: