Star Trek: The Next Generation: "The Most Toys" 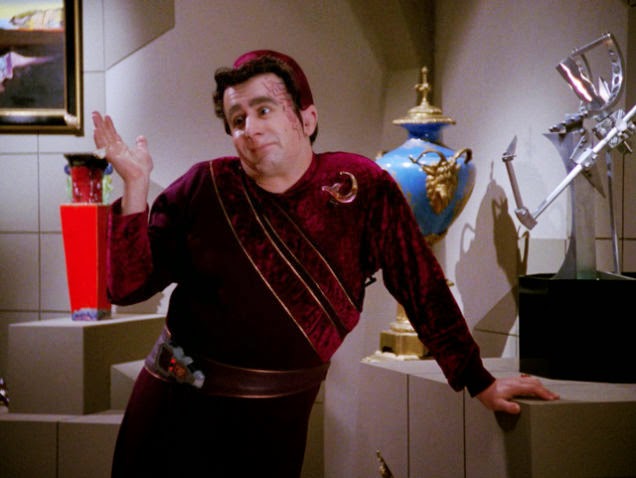 The Enterprise has met with a rogue trader to collect a badly needed supply of hytritium, a volatile substance that can cure a deadly contamination on a nearby Federation colony. When Commander Data's shuttle containing the last of the hytritium explodes, the Enterprise crew are forced to proceed with their missing while mourning their dead colleague - not realising that the real Data has been kidnapped by the same trader, Kivas Fajo (Saul Rubinek) - who plans to make Data the centrepiece of his collection of rare treasures.

Saul Rubinek was a last-minute replacement for David Rappaport, who attempted to commit suicide a few days into the original shoot. Once the role of Fajo was re-cast, the relevant scenes were re-shot and production continued as normal. Sadly Rappaport's second suicide attempt was successful; he died on 2 May 1990, just before "The Most Toys" was broadcast. It's important to note the last-minute nature of Rubinek's casting - he was available, he was a Star Trek fan keen to appear in the series, and he was a personal friend of the episode's director Timothy Bond. It's important, because what happens next is arguably all just a horrible mistake: they make Fajo into a Jewish stereotype.

Not an actual Jewish person, of course. Kivas Fajo is a humanoid alien with some strange ritual tattoo across half of his face. He is, however, played by a Jewish actor, and his costume incorporates a small skullcap that could easily be misinterpreted as a yarmulka. He's a trader and a greedy hoarder of wealth, which pretty much align perfectly with grossly distasteful stereotypes of Jews going right back to the Middle Ages. Rubinek appears to channel Woody Allen for half of his performance. Either by accident or design, and I'm personally inclined to believe it was an unfortunate accident caused by last-minute casting and lazy creative choices, they manage to make "The Most Toys" a relatively offensive episode to watch. That said, I'm personally not Jewish - I honestly couldn't say if this episode was offensive to Jews themselves or not, but it feels as if it should be.

This is a shame, because it's largely a very good episode. Brent Spiner does a marvellous job of emoting without emoting. He manages to make us feel great sympathy for Data without actually doing much more than what he already does. His performance is expressed entirely in rational complaints and carefully timed pauses. There's a subtle rising tension within Data as he moves from verbal debate to passive resistance and all the way up to the climax where he perceives no logical conclusion other than to cold-bloodedly murder Fajo where he stands. A last-minute transporter beam stops him from going through with the murder, but interestingly when quizzed on the detected weapons fire Data point-blank lies to Commander Riker and suggests it was some kind of misfire. It's a running gag with Data: he professes to having no emotions while constantly experiencing them. This episode takes him into the darkest territory he's yet explored, and it's a pity it's tainted by how Fajo is portrayed.

Back on the Enterprise, the crew go through the process of mourning Data. It's a tricky subplot to make interesting, because we know Data is alive and well, and any extensive scenes of grief are going to be wasting the audience's time. What is included is well-paced and performed. Geordi and Wesley sort through Data's possessions. Picard has a quiet moment alone in his ready room. Troi talks to Worf about having to take over the job of a second dead colleague in a row. It's all rather well done, and helps break up the scenes between Data and Fajo that largely take place in the one room.

I want to like this episode more than I do. It's mostly very good, but the Jewish stereotype is really bugging me. No matter the conditions under which they filmed things they should have known better. So, reluctantly, it's a 'no' from me. That leaves Season 3 with 13 good episodes out of 22, and a quality ratio of 59 per cent.
Posted by Grant at 8:45 PM