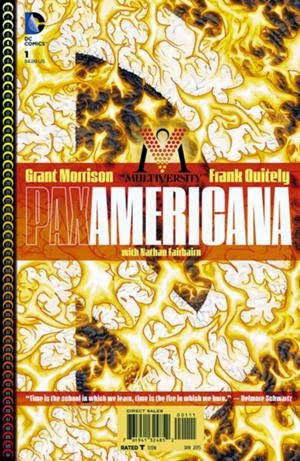 For decades now there's been a simmering hatred between Alan Moore and Grant Morrison. It all basically boils down to Moore firmly believing that Morrison keeps plagiarising his work and stealing his ideas, and Morrison basically wanting the angry old man of comic books to back off and leave him alone. One can only imagine the blind rage Moore will reach if he gets word of Pax Americana, the latest one-shot in Morrison's ambitious Multiversity maxi-series.

Each issue of Multiversity has focused on a different parallel DC Universe. This issue focuses on the Charlton Comics characters that DC purchased in 1983: the Question, the Blue Beetle, Captain Atom, and others. When DC originally picked up these characters, they hired Alan Moore to re-introduce them in a 12-issue comic series. As he developed it, however, DC elected to remove the Charlton identities and allow Moore to develop his own pastiche of them (Rorschach instead of the Question, Nite Owl instead of Blue Beetle, and so on). The result was Watchmen, pretty much the most widely acclaimed superhero comic of all time.

Multiversity is in itself a pastiche, and if Morrison is going to use the Charlton characters what better source text to reference and riff upon than Watchmen? It's a stunning post-modern piece of comics writing, and Frank Quitely illustrates it in his typically awesome style. At the same time I spent the whole book thinking "Moore's going to be so pissed". Like a lot of Morrison's work, each issue of Multiversity is leaving a lot of the narrative hanging. I'm assuming it's all going to tie together in the end - it usually does with Morrison. Even on its own, however, Pax Americana is a stunning and bold re-invention of past writers and characters. (5/5)

Under the cut: reviews of Annihilator, Batman and Robin, Batman Eternal, Batwoman, Daredevil, The Last Broadcast, Lumberjanes and Predator: Fire and Stone.

And sticking with Grant Morrison we get the third issue of Annihilator. As noted in previous columns, this book feels very much like a continuation of Morrison's earlier work: a real-world screenwriter dying from a brain tumour is being tormented by his fictional creaction - who might just be real and from another dimension, and the tumour a 'data bullet' that will kill him if doesn't complete his screenplay. The script continues to be weirdly entertaining, but a little overly familiar in respects to Morrison's earlier work. Frazer Irving's artwork is to die for: lush, colourful and beautifully laid out. (4/5)

This continues the outstanding string of issues that Batman and Robin has been enjoying recently, as Batman flies across the surface of Apokolips in a desperate race to retrieve his son's body. This is real big-screen, epic action of a kind we rarely get to see Batman engage in, and it's both written and illustrated faultlessly. This issue his sidekicks - Red Robin, Batgirl, Red Hood and Cyborg - finally catch up with him, and an expected but welcome foe makes a last-minute appearance. Damn these cliffhangers. I don't want to wait a month to see what happens next. (5/5)

Another book that's been enjoying a run of really high quality issues. Hush is destroying Batman's weapons caches one by one, sending Batman and Julia Pennyworth on a desperate race to shut them down before he gets there. This is another fast, tense action-oriented issue, and the weekly string of crises, one laid on top of the other, is reminded me an awful lot of the TV series 24. A weekly comic book could do a lot worse than use that as its template. Jason Fabok's artwork is great as well. (4/5)

So three months ago Batwoman had been bitten by a vampire. Two months ago we flashed forward five years to see a paranormal super-team attempt to take the vampire Batwoman down. One month ago we saw the same time only a few weeks into the future fighting magically powered villains in space. This month we're finally back to where we were three months ago, with an infected Kate Kane growing increasingly vampiric, and Jason Blood and Etrigan the Demon getting properly introduced to the book. There I was, happily falling out of love with this book entirely, and they had to go and introduce Etrigan. It's as if DC knows what I like. (3/5)

Blah bah Daredevil blah blah Mark Waid blah blah superlative writer blah faultless characterisation blah return of a semi-obscure villain with an ingenious fresh angle blah perfect balance of light-hearted comic banter and darker character themes blah blah Chris Samnee's perfect artwork month in month out blah blah blah remains most consistently high-quality superhero comic on the market blah blah should really just cut and paste this paragraph into the column each month and save time. In Waid and Samnee's hands, Daredevil is a stunning piece of work. It's going to be an absolute tragedy later this year when they finally move on. (5/5)

The Last Broadcast wraps up in a wonderful and entertaining fashion, with questions answered and everything pulling together into a neat climax. Over the course of this seven-part miniseries two things have impressed me in particular: the beautiful presentation, with nice paper quality and matt cardstock covers combined with beautiful layouts and production values, and the artwork. Gabriel Iumazark has a beautiful style that seems manga influenced but distinctive enough to stand on its own two feet. The book also uses wonderfully subtle colours throughout, which enhance the storyline without ever drawing attention. This is soon to be collected into a hardcover book, which should really be something worth getting. (4/5)

This was originally going to be the final issue of Lumberjanes, and indeed it's a brilliant (and brilliantly funny) wrap-up for the initial story arc. Thankfully the book has sold so well that Boom have expanded it to ongoing status, and we have a potentially endless series of Lumberjanes adventures in store. This really is a stunning book: nicely written and engagingly illustrated, suitable for all ages but also containing elements to actually appeal to all ages. We need more books like this on the shelves. We need more books like this selling well on the shelves. (4/5)

There's something fairly simple and iconic about Predator that makes it a pretty solid bet for comic book adaptations: the Predator looks cool, and it has a very simple and visual job description. This is certainly coming across in this miniseries, which feels like the simplest of the four Fire and Stone comics but also has a certain degree of charm as a result. The problem of scheduling that has plagued all of the miniseries is still a problem here: it would be a lot easier had Dark Horse just released one miniseries at a time, because reading four simultaneously does get needlessly confusing. (3/5)

Winner of the Week: Multiversity: Pax Americana, but don't tell Alan Moore.
Loser of the Week: No loser this week, which is pleasant.
Posted by Grant at 4:50 PM