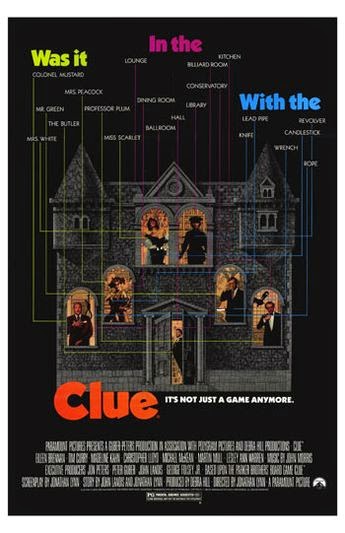 I remember everybody leaping onto the bandwagon in 2012 to mock Peter Berg's sci-fi action flick Battleship for actually attempting to adapt a board game into a motion picture. This wasn't Hollywood's first attempt to turn a board game into a movie of course; back in 1985 Paramount Pictures released Clue, aka Cluedo, based on the popular murder mystery game. It's an odd little film which broadly succeeds by refusing to take itself seriously. Is it a good film? I'm honestly not sure. I laughed, just probably not quite enough for me to give it an enthused recommendation.

The film was written and directed by Jonathan Lynn, best known for co-writing the excellent BBC comedy Yes Minister. This was Lynn's first feature film, but not his last: he went on direct My Cousin Vinny, The Whole Nine Yards, The Distinguished Gentleman and The Fighting Temptations.

It has a strong cast of comic actors, including Tim Curry, Lesley Ann Warren, Madeline Kahn, Christopher Lloyd and Michael McKean. It's essentially a farce: people running in and out of rooms, comical misunderstandings, mannered performances. How much you enjoy the film does, in part, depend on what you think of farces.

Tim Curry is particularly strong as Wadsworth, the butler who brings a manor house of suspects together and then leads the haphazard investigation once people start getting murdered. He's always been an underrated comic actor: he was typecast early on as Frank'n'Furter in The Rocky Horror Picture Show and has never quite managed to escape from under that role's shadow. Here he manages to be funny and heroic, effectively turning into a pseudo-Sherlock Holmes by the film's conclusion.

And the ending is far and away the best part. They made three of them, and in the film's original release these endings were randomly distributed to theatres. See the film in one cinema, and the murderer might be Colonel Mustard. See it in another, and it might be Miss Peacock. It was a pleasant surprise to learn that Paramount's DVD release allows you to select a random ending before you play the film - TV broadcasts and VHS releases just ran all three endings together in a row, which rather spoiled the effect.

This is a pleasantly filly, inordinately silly little film that seems to be half-forgotten these days. It's worth tracking down for a Sunday afternoon or a quiet Saturday night in: there's certainly enough good material here to forgive its weaker, more predictable moments.
Posted by Grant at 8:57 AM