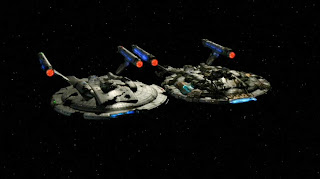 Before the Enterprise has time to head for the subspace corridor that will take them to the Xindi Council, it is intercepted by another Enterprise. This future alternate vessel is commanded by Lorian, son of T'Pol and Trip, and has arrived to prevent the present-day Enterprise from attempting to enter the corridor. If it does, it will be thrown more than a century into the past and lead to the battered generation ship now attempting to stop its journey.

Oh Star Trek: you and your wacky time travel alternative timeline stories. You really do love them. How do we know you love them so much? Not only have you interrupted the momentum you finally built up with the Xindi story arc, this is the second such alternate future storyline you've produced this season. "Twilight", featuring a future Captain Archer attempting to change the past, only aired back in November 2003. That's six months ago. Was this series really so short of storylines in Season 3 that it needed to return to the same well so soon?

Redundancy and time-wasting aside, "E²" is actually a pretty entertaining episode. The highlight is David Andrews as Lorian, who manages to immediately sell to the audience his heritage as the son of T'Pol and Trip. The fact that he exists at all also generates great character drama and development for his future parents: T'Pol is refusing to acknowledge her feelings for Trip, and of course seeing that in the future they have a son only makes avoid her feelings ever harder.

The episode also does some interesting stuff in terms of openly telling the characters what's going to happen to them in the future. Usually things are kept as secret as possible - 'we can't tell you what's going to happen in the future, it would risk the timeline' and so on. Here it's all on the table: Archer will marry an alien woman and his great-granddaughter will be first officer. Phlox will have nine kids. Mayweather will hook up with one of the MACOs. Reed will die alone and unloved.

There's something about Reed. He's never gelled for me as a character. I'm not sure if its Dominic Keating's performance, or the manner in which he's written, but he's possibly the most unlikeable regular character in the whole of the Star Trek franchise. He seems constantly unhappy and suspicious. I can't remember the last time he did something sweet - building a snowman on a comet in Season 1 seems a very long time ago.

At the episode's end, the Enterprise does manage to escape through the subspace corridor, and without accidentally moving back a century in time. The future/past Enterprise doesn't follow them through. It's never heard from again. 'Maybe it's gone,' suggests Archer, 'because we've change history.'

'Are you suggesting that the other Enterprise never existed?' asks T'Pol. 'If you're right... then why would we remember them?'

'If you haven't worked out how your time travel mechanics work,' says Grant, 'then maybe you shouldn't poke holes in it right in front of the audience.'