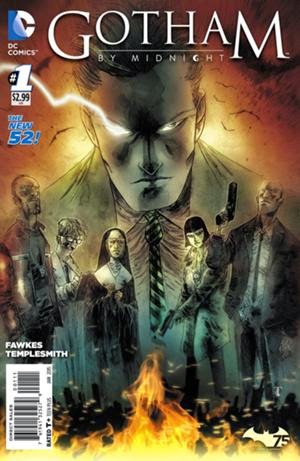 DC's excellent expansion and diversification of their Batman titles continues this month with the debut of Ray Fawkes and Ben Templesmith's Gotham by Midnight. We've had Catwoman shift to organised crime drama and Batgirl to hipster twentysomething shenanigans, not to mention Bruce gear up to punch New Gods in Batman and Robin. We've had Gotham Academy introduce boarding school hijinks and Arkham Manor transform Bruce Wayne's manor into a psychiatric hospital.

Gotham by Midnight is the third new title, and follows a group of Gotham City police detectives as they investigate supernatural horrors during the city's night shift. One of them is a young goth, another a moody forensic specialist. The third is a nun. They're led by Detective Jim Corrigan, a calm and driven officer who also happens to be the host for the Spectre.

This is a brilliant vehicle with which to properly re-introduce the Spectre to DC Comics. The character has always had promise, but has historically struggled to find a solid, long-term audience. I really think this might be his chance. The book boasts a strong, creepy script by Ray Fawkes, and that creepy tone is perfectly matched by Ben Templesmith's outstanding artwork.

I've been a fan of Templesmith for years, and while it's odd to see him working on a corporate-owned title he doesn't slack up in providing the artwork. His colours are always particularly impressive, and always give the impression his art is somehow illuminated from within. It really is the perfect match, and helps Gotham by Midnight be an exceptional first issue. There's no doubt what sort of book you're getting here, and personally it's a book I think I'm going to adore. (5/5)

Under the cut: reviews of Aliens, Aquaman, Batman Eternal, Catwoman, Deathstroke, He-Man and the Masters of the Universe, Infinity Man and the Forever People, The Massive, ODY-C, Teenage Mutant Ninja Turtles, Umbral and Usagi Yojimbo.

Aliens: Fire and Stone is a strong, well-written comic miniseries that's suffering from being published alongside Prometheus: Fire and Stone - which is also reasonably strong and well-written, but which is set on the same planet, stars similar characters and seems to be largely telling a fairly similar story. It's this constant confusion ("which Fox franchise spin-off am I reading now?") that's making Fire and Stone struggle quite a lot as an event comic series. I look forward to future series where each branch of the saga can break off and do it's own thing. It's overlapping too much right now. (3/5)

This issue sees Aquaman team up with the Martian Manhunter. I've always enjoyed superhero team-ups, and I've also always liked the Martian Manhunter, so that makes this issue pretty awesome in my eyes before I even started reading. The storyline itself is pretty cool, with Arthur uncovering a conspiracy in Atlantis' recent past and psychic phenomena turning J'Onn from useful friend to dangerous enemy in the space of a few seconds. Jeff Parker has really started to develop something interesting with this book, and it's gradually shifting from entertaining diversion to must-read. Hopefully it keeps developing in this direction. (3/5)

Well things just keep getting worse and worse for Batman. I was wondering how on Earth they were going to sustain this story for another 20-odd issues, and of course it turns out that the writing team had another twist up their sleeve. This is another fast-paced, fairly strong issue, which must make about seven or eight in a row now. This has finally become the Batman comic I was hoping it would be. Fingers crossed it stays that way. (4/5)

Genevieve Valentine's re-imagining of Catwoman as a crime drama continues as Selina Kyle works to unify Gotham's crime bosses in an attempt to reconstruct the city. There are some complications introduced this issue: there's someone else trying to spearhead reconstruction themselves, there's a new Catwoman roaming the rooftops, and Black Mask is slowly making his presence known. Now I hate Black Mask almost as much as I hate Hush, but he's a minor presence - and to be honest I'm much more interested in the crime saga that's developing elsewhere in the book. This is a mature, intelligent take on an oftentimes misused character, and it's got great artwork: what's not to like? (4/5)

This issue feels more solid than the last, with a newly reinvigorated Deathstroke getting some critical plot information that helps to make the story a lot more readable than it was last month. A mass attack halfway through gives the book some much needed action, while the introduction of Bronze Tiger and Lady Shiva sets up what should be some solid action in future months. Daniel's art is strong, as it always is, but I still have lingering doubts about his skills as a writer. All up, this shows promise, so I shall stick with it for the time being. (3/5)

He-Man and the Masters of the Universe #19

With a relaunch on the horizon, this final issue of Masters of the Universe feels like a weird sort-of fill-in, as if DC management completely forgot that they had solicited a 19th issue and desperately scrambled to fill the gap with whatever they had lying around. We get an odd flashback to Prince Adam's childhood, foreshadowing his eventual transformation into He-Man, which I assume will tie into The Eternia War that's about to debut. None of it feels particularly necessary. Nice cover though. (2/5)

Infinity Man and the Forever People #5

Guy Gardner turns up to force the Forever People off the Earth by force, leading to an issue-long fist-fight. Meanwhile a new challenger to the New Gods is introduced. On the plus side Grummet and Hanna's artwork has a lovely sort of late 1990s vibe to it, which makes me quite nostalgic and happy. On the negative side: I really don't get the point of this comic. Here we are, five full issues in, and I don't have a handle on who the characters are or what's supposed to be happening. This is a book floundering without a direction, basically marking time until Didio can't afford to publish it any more. (2/5)

The world begins to end, and the crew of the Kapital - now safely onboard the Massive - are left to watch it happen. This issue frustrated me somewhat, because we're now only left with one more issue to go and I don't feel we've progressed any further than where we were at the end of the last issue. It's almost as if Wood had a deal to write 30 issues but only had material to justify 29. As a result this feels a little bit like treading water. Sure, stuff happens - but it probably could have been condensed easily into the last issue. It will probably read fine as part of a trade paperback collection, but as an individual issue it's readable but unnecessary. (2/5)

Now here's a comic that makes a pretty sensational first impression: the very first image of ODY-C is a colossal eight-page gatefold image, introducing Odyssia victorious over Troiia. This book is a science fiction gender-swapped retelling of Homer's The Odyssey, rich in visual detail and written with a deliberately stylised and lyrical fashion. Sci-fi retellings of The Odyssey aren't new - I remain a huge fan of the 1980s anime Ulysses 31, for example - but this is a highly distinctive and intelligent version indeed. It's dense, rich in background detail and handsome constructed. I think I've found another Image science fiction book worth buying - when they're this good it's hard to complain. (5/5)

Two short stories in the one book is something I can enjoy, particularly on a fairly straight-forward all-ages book like this. What flummoxes me, however, is that one of them ends on a cliffhanger to be resolved next month. Why not just run the whole story in the one issue? It's a mild frustration, but otherwise this book is nicely illustrated - I love seeing how different artists translate the CGI cartoon's aesthetic to comic art - and fairly funny. (3/5)

No one is who they seem in Umbral - that seems to be a general rule for this exceptional dark fantasy comic. We learn unexpected things about two of the lead characters this issue, and the book's going to be thrown off into new direction because of both revelations. One of the surprises I kind of saw coming, but the other completely threw me. In the best tradition of good writing, the twists are surprising but make a lot of sense when you take a step back and think about it. (5/5) 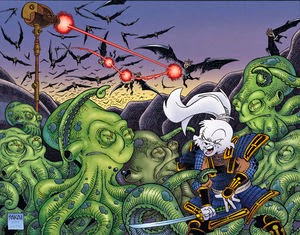 This issue is worth it for the final page reveal alone, which I shall not spoil here. Instead I'll continue to praise the storytelling skills of Stan Sakai, who is almost unparalleled in his ability to sketch a few ink lines and suddenly tell an emotive, well-researched and compelling story. This issue came along at just the right point in Sakai's story as well, where things were at the risk of starting to feel repetitive. Instead he moves his story along to a climactic final issue next month. It's been a great, albeit slightly weird, diversion for the world's most popular samurai rabbit. (4/5)