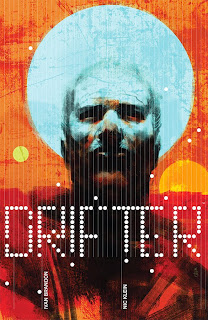 A pilot crashes his spacecraft onto a frontier planet. He wakes some days later in a frontier colony town, where he seems set to make violent first contact with the locals. That's basically the premise for the first issue of Drifter, a new monthly comic from Image written by Ivan Brandon with art by Nic Klein. Brandon's writing is solid but doesn't really do anything that grabbed my attention. Klein's artwork is absolutely stunning, and joins a recent spate of really beautiful Image books. So far so good.

My big question is: does Image need a book like Drifter? If there's one genre that's been in plentiful supply over there it's been science fiction. Prophet just wound up a run monthly run of Rene Laloux-style weirdness. Copperhead kicked off three months ago, with a very similar western frontier vibe (albeit much more on the nose). We only recently had Planetoid, Storm Dogs, and Debris. Saga is still selling like gangbusters. I'm not suggesting there isn't room for more sci-fi in comics - how many superhero books get published a month? - but based on this issue I don't see any way in which Drifter differentiates itself from the crowd. It's coming in too late to the party, and runs the risk of being an also-ran. How many more comics do we need to read about gun-toting gritty heroes on western-inspired frontier worlds? Clearly Brandon and Klein feel there's room for one more, but I'm not entirely convinced. (3/5)

This is just an all-out knockout issue: smart, bright, playful and beautifully illustrated. It still feels weird to see DC, a company that's spent the last decade forcing all of their books to be grimmer and more violent that ever before, publishing a superhero books that's so light-hearted and fun. This is clever, pop culture-savvy stuff, boasting funny dialogue, smart design and new villains riffing on Japanese tokusatsu TV shows. I know we're only two issues into this run, but it's already giving the pre-52 Stephanie Brown run competition for "best Batgirl comics ever". (5/5)

This issue came as a complete surprise. It's impossible to discuss without beginning to spoil it: basically the issue started seeming like this new "Endgame" arc was going to be one thing, and has ended being something else entirely. I did not expect what was in this, and my surprise made this one of the best single issue's I've read this year. Scott Snyder really is the Batman writer of this generation: I'd happily read him write these stories - and Capullo and Miki illustrate them - forever. Bonus marks for the meta discussion over superhero vs. superhero fights that Batman has while punching ten bells out of Superman. (5/5)

It's a good week to be a Batman fan. While not scaling the heights of Batman or Batgirl, Batman Eternal still gives a hell of a lot of entertainment. Batman crosses paths with the Spoiler for the first (New 52) time. Hush manages to not make me want to run screaming from the room. The campaign against Batman moves up another notch, as a penny drops too late and a crucial part of his support network gets knocked out. This has been a vastly improved book in recent weeks, and I really hope this renewed energy and focus continues into the future. (4/5)

I'm glad I stuck with this future western, because it's getting better with each issue as the characters become more fleshed out and the world-building has continued. The most intriguing addition this issue is Ishmael, a surviving member of a race of artificially bred soldiers designed to fight wars on the humans' behalf. He's well written, and very slightly creepy, and I can't wait to find out more about him. This book has strong characters and a nice design aesthetic. If you're buying a sci-fi western this week, I'd definitely recommend Copperhead as the one. (4/5)

The two-part flashback into Cicero's origins wraps up. While it's generally been enjoyable stuff, it feels a bit like padding: is there anything I read in the past two issues that couldn't have been expressed through dialogue and backstory in current storylines? I feel like the book has lost a bit of momentum while indulging in this brief arc, and what happens next issue is critical to maintaining my interest. As it stands this is a fairly enjoyable comic, but it's clear it could be much, much better than it currently is. (2/5)

I have no idea what the hell is going on in this comic. This is a classic example of how to make a comic book difficult for a reader, through sheer lack of contextual information. Who are these characters? How are they related? What are they doing? I'm all for open questions and mysteries in comics, but the writer has to give his or her audience something with which to catch onto and with which to engage, and I don't feel that I'm getting this from Klarion. McCarthy's artwork is good, Nocenti's writing is fuzzy and confused. Not recommended. (1/5)

Three issues in and I'm still fairly impressed with how well-written this miniseries is: it ties the original Prometheus film to Aliens in an interesting way, and is managing to tell a much more intriguing story than the Prometheus film ever did: more action, better body horror and a plot that isn't liberally taken from Eric von Daniken rubbish. The artwork is great as well; I want to keep an eye out for Juan Ferrerya in the future. Of the four Alien/Predator miniseries Dark Horse is running at the moment, I think this is my favourite. (3/5)

This issue wraps up a neat little courtroom drama in which Captain America is being sued for wrongful death, with Matt Murdock (aka Daredevil) representing the plaintiffs and Jennifer Walters (She-Hulk) representing the good Captain. This issue features a neat little flashback to a pre-Captain Steve Rogers, as well as a very strong conclusion. It's been a great storyline - certainly the best in this comic to date - and I know I mentioned this last time, but seriously: how has no one thought of a Daredevil versus She-Hulk legal battle before? (4/5)

This book is just a joy to read, month in and month out. It's got Allred's patented pop art visuals. It's got a wonderful and whimsical script by Dan Slott, who's clearly having a ball throwing out all manner of weird and ridiculous settings and characters. All up it provides something that's in regular short supply among superhero comics these days: it's fun. It reeks off fun. It has fun coming out of every orifice. This issue even gives an amazing amount of depth and personality to Norrin Rad's surfboard, for goodness sake. (5/5)

The new female Thor makes her proper debut, smashing her way through an army of frost giants to reach Roxxon's base. Aaron is keeping the new hammer-wielding goddess' true identity a secret for now, which is a double-edged sword. On the one hand it preserves the mystery for a few more issues, and might help sales. On the other it's a lot harder to engage with a protagonist if their story is deliberately preventing you from knowing who she is. It's promising, but I think for the secret identity reasons it's a little hard with which to completely engage. (3/5)

It's distressing enough seeing a likeable character have their face melted off by an alien death ray, but if the character's also a cute and fluffy anthropomorphic animal? It's intolerable! In the best possible sense, of course. This book is entertaining me almost beyond measure, with its cute artwork, efficient archetypal plot and solid, entertaining characters. This could easily be a superficial joke comic, but to their credit Abnett and Culbard are going out of their way to make it an independently intriguing and dramatic story. (5/5)

I'm still not sure what I think of this book. I gave it a second issue because I was sufficiently interested by the first, but it's left me just that bit too ambivalent. I want to engage better with the characters, and so far it's not quite gelling. It's not bad by any stretch, in fact I suspect many readers will adore it, but despite Jock's typically outstanding artwork I find myself rather unaffected by it all. I'm now on the fence over whether to read issue #3 or just wait for a trade paperback, since I suspect it will be much more readable in large chunks than in month-by-month instalments. (3/5)