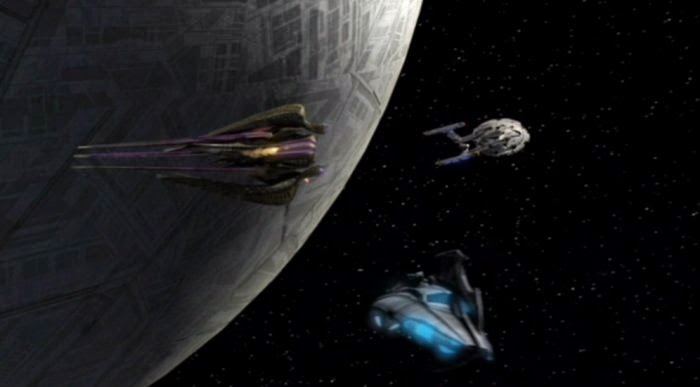 Repairs continue onboard the Enterprise, which remains critically damaged from the Xindi attacks. Archer invites two of the Xindi council to meet him on Enterprise, in an attempt to convince them that humanity is not their enemy. T'Pol continues to suffer the withdrawal symptoms from her trellium use, while a sleep-deprived Tucker struggles to write a condolence letter to the parents of a dead crew member.

It might have taken them most of a season to get to this stage, but with "The Forgotten" Enterprise really seems to have settled into its new serialised formula. This is an episode almost entirely about the after-effects of other episodes, giving the series a rare chance to relax a little and let a number of emotional trajectories flow to their natural conclusions. It's boosted by series-best performances. It's a pity that Enterprise got so widely disregarded by fans and critics because the acting of its three leads - Scott Bakula, Connor Trinneer and Jolene Blalock - is about as good as acting on Star Trek gets.

How refreshing to have an episode of Star Trek with ongoing consequences. It's been two episodes since the Enterprise took its cataclysmic battering, and it's still barely limping through space. Archer and T'Pol are still visibly beaten and bruised by their respective ordeals. Half the lights on the ship don't seem to work. The space battle in "Azati Prime" felt at the time like the most brutal scene of its kind; these ongoing troubles and slow recovery only make it seem more devastating. By taking the time to produce episodes like this, the writing team allow the story to become more believable.

Taking this time e get a whole episode for the two Xindi, Degra and Jannar, to assess Archer's evidence and make up their mind on whether to believe him or not. The episode is particularly valuable in terms of fleshing out Degra. He's been in several episodes now, played well by Randy Oglesby, and here we see a fresh side to the character as he's forced to confront the reality of how many innocent humans his trial super-weapon caused. He's become a very sympathetic character over the course of the season, and Oglesby and Bakula play the growing respect between Degra and Archer very well.

Jolene Blalock plays T'Pol's withdrawal brilliantly, giving the character a jittery, edgy performance where it looks like she's always one moment away from a complete emotional collapse. Her conversation with Phlox early in the episode is one of the highlights, as he calmly warns her that her drug abuse may have permanently affected her ability to control her emotions. It's a good episode all round for Phlox, and actor John Billingsley, as he gets another great scene forcing Tucker to take a break from repairs and get some sleep.

Tucker's own plot thread is probably my favourite of the lot. He has to write a condolence letter, but finds it impossible to work out what to say. As the episode progresses it becomes clear it's not his crewmate's death that is affecting him, but rather his sister's death when the Xindi attacked Earth. This is a narrative that's been building through the whole season, and it hits a touching and quite heartfelt climax here.

This episode possibly isn't everyone cup of tea, since it begins in the middle of the story and ends with the story still going on, and it focuses less on a driving plot and more on character development. It's a brilliant hour of television though: well considered, beautifully acted and giving all of the characters much-needed space to adjust to their changing situation and re-focus towards the fast-approaching season finale. 20 episodes in, and Season 3 of Enterprise has had 11 good ones. The quality ratio is now 55%.
Posted by Grant at 9:44 AM