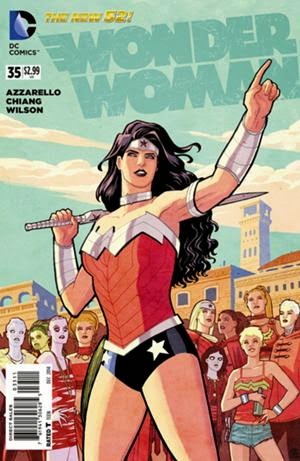 Three years of story has paved a road to this: Wonder Woman #35, in which Brian Azzarello and Cliff Chiang's sprawling epic comes to its ultimate conclusion. It's a god-versus-god battle for the fate of Olympus, with Diana the God of War on one side and Zeus' Firstborn on the other.

This has been one of the single-best Wonder Woman storylines ever. Cliff Chiang has developed a wonderfully simple and powerful look for Diana, and extended his wonderful design skills to a whole host of new characters for the comic to exploit for decades to come. Brian Azzarello dragged the property back to its mythological roots, ruffling some feathers at first with his contentious changes to Diana's back story, but finding a lot more value in what he added than in what he had removed.

What has really benefited this book is how separate its remained, by-and-large, from the DC Universe proper. Over in Justice League and Superman/Wonder Woman, Diana has been pushed into a tortured and unconvincing romance with Superman, and it's been such a relief to never see that storyline rear its head in Wonder Woman proper. The isolation has allowed for this extensive, epic tale to be properly told in full - and I'm grateful to DC's editors for letting that happen. (5/5)

Next month the book shifts over to David and Meredith Finch. I'm not familiar with Meredith Finch's work as a writer, while I'm not a fan of David Finch as an artist. I'm still on the fence as to whether or not to give this new version a chance or to cut my losses here on a high.

Under the cut: Aliens, Batman Eternal, Doctor Who, The Massive, Saga and Umbral. I also purchased Black Science but am running behind and haven't reviewed issue #9 or #10.

The problem with Dark Horse simultaneously publishing four inter-linked Alien and Predator titles is that it's rapidly becoming difficult distinguishing between each of the storylines. This issue, while fairly enjoyable, feels less like an Aliens comic and more like a Prometheus comic - and it's already conflating in my mind with the actual Prometheus comic. Which character is in which book? What plot point happened where? I'm becoming increasingly confused, but it's a scheduling problem rather than a creative one. Patric Reynolds' artwork is great, but then the Aliens books always used to have pretty great art. (3/5)

This is a breakneck issue: frantic from page 1, it pretty plays entirely as climax as Deacon Blackfire's attempts to be reborn beneath Arkham Asylum force the Spectre to finally emerge from within Jim Corrigan. The results are cataclysmic, and Fawkes' script and Pasarin and Ryan's artwork expresses the desperate situation brilliantly. Several key characters appear to meet their maker (but of course they clearly won't have - this is still a superhero comic), and certainly Arkham Asylum isn't going to be the same for a while. Where the story goes from here is anybody's guess. (4/5)

I'm thinking of maybe cutting and pasting each week's review of Titan's Doctor Who comics and saving myself some time, since by and large all three monthlies sees to follow the same basic pattern. The art is generally good (although I'm personally not a fan of Boo Cook's style right here), and the scripts tell reasonably entertaining stories, and all three continue to nail their respective Doctors' personalities and styles. There's some nice story detail in this issue, of a time paradox persuasion, that lifts it up a bit, but all in all it's competent and enjoyable without being exceptional. (3/5)

We're into the final three issues of Brian Wood and Garry Brown's remarkable post-apocalyptic saga, as a strange floating land mass detaches from the ocean floor and becomes a centrepoint to the latest intra-human conflict. Cal's on death's door while Mag tries to get some sense out of the mysterious Mary about what's actually going on. I'm finding this final six-part arc, the portentously titled "Ragnarok" to be a genuine mystery. After this we've only got two issues left, and I honestly can't perceive where we're going with all of this. It's exciting because it's such a mystery. (4/5)

The fourth volume comes to a close. It was pretty much my least favourite volume, because for the most part the story seemed to stall and struggle while at least one of its protagonists became actively unlikeable. This final issue skips the majority of those problems by refocusing on characters from volume 3 - including fan-favourite Lying Cat. It feels like the last five issues were just a tedious distraction, and that the book is now back on track for volume 5 in early 2015. Here's hoping. (4/5)

Umbral is a simply marvellous high fantasy, providing the sorts of characters and narratives that you'd expect from the genre but importantly telling it with a bit of an edge and in highly visual ways. It's a genre that seems purpose-built for comic books, yet always struggles to gain traction with readers. Frankly, anyone reading other Image titles like Saga or Rat Queens should also be reading Umbral. This issues sees Rascal and Dalone taken to a city of thieves and cutthroats, with some surprising revelations and reunions along the way. It's marvellous stuff. (5/5)