Doctor Who: "In the Forest of the Night" 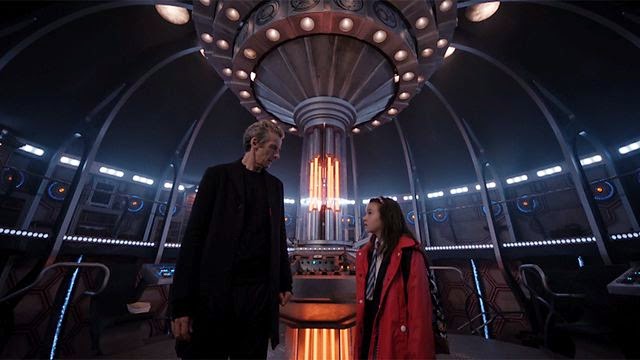 The Doctor arrives in London to find a 12 year-old girl standing outside the TARDIS, and a massive forest overwhelming the city. Reunited with Danny and Clara - not to mention an entire class of Coal High School students - the Doctor races to work out what has caused the trees to sprout up around the world overnight.

I was quite keen to see "In the Forest of the Night" because it was written by Frank Cottrell Boyce, who has written two of my favourite screenplays of recent years: Michael Winterbottom's 24 Hour Party People and Danny Boyle's superb children's film Millions. If he could bring the quality and originality he brought to those films into Doctor Who we could really have been in for something special.

And he sort of brings it and he sort of doesn't. I'm on the fence about this episode. It's an episode I want to like more than I do. It's neat moments and its humour don't quite compensate for the fact that it's a pretty silly story that isn't told particularly well.

So what works? The class of Coal Hill are for the most part genuinely funny, and get pretty much all of the best lines. The idea of the Doctor having to defend a class of 12 year-olds from harm is great, and plays very well to Peter Capaldi's strengths. The series keeps pairing the Doctor with children, and dramatically it works incredibly well. It keeps making me wish they'd actually pair the Doctor with a child companion - although I'm obviously very aware why this could never practically happen.

Clara and Danny's relationship continues to struggle in the wake of her continued adventures with the Doctor. I feel as if this storyline has moved a bit too painfully and is stuck in a rut: it's been several episodes in a row and I'm not sure how much longer it's going to sustain my interest this way. I also find myself siding very much with Danny in this episode: Clara wants to rush off with the Doctor and save the world; Danny wants to take care of the children over whom he has responsibility. I'm not sure making Clara unlikeable again was on Boyce's agenda - I assume not - but after several weeks of warming to the character I find myself a bit off-side again.

As for the overall storyline? It suffers badly from two problems. The first is irrelevance: basically whatever happened here would have happened with or without the Doctor's interference, relegating him to spectator status in his own series. The second is the trees. Trees are wonderful things, but they're also almost entirely undramatic things. It's hard to be afraid of a tree. M. Night Shyamalan tried in The Happening with broadly disappointing results, and Doctor Who fares little better here.

This is an episode where you can see the reasoning behind most of the story choices, and you can clearly see its creators' intent. At the same time it just doesn't really work. I wanted to like it, I gave it my support, but - bottom line - it simply isn't good enough. This was the 10th episode of Season 8, and - along with "Deep Breath" and "Robots of Sherwood" - one of the 'bad ones'. It's better than both of those episodes, for certain, and by a long distance as well, but it still wasn't good enough for me to actually like it. The quality ratio is at 70% with two episodes to go.
Posted by Grant at 3:50 PM