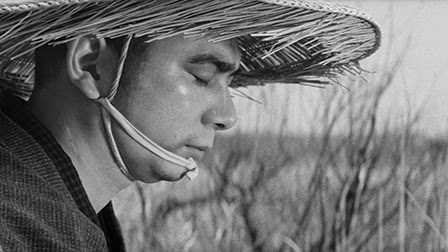 I think there’s an argument to be made that there are two types of samurai movie. There is the kind that is all about the samurai, ronin and various swordspeople slashing each other to death with swords. There is also the other kind, which is all about the moment of zen-like stillness before the samurai et al start slashing each other to death with swords.

The Tale of Zatoichi definitely falls into the latter category. This is a historically significant film, as it is the first in a long-running series of movie featuring Zatoichi, a master samurai turned blind masseuse. Played by Shintaro Katsu, the character featured in a run of twenty-six feature films and 100 television episodes between 1962 and 1989. He has subsequently been re-cast and re-made, notably by actor/director Takeshi Kitano in his internationally successful remake Zatoichi (2003). That was a great film; as is often the case, however, the original is better.

The film is set in a feudal Japanese town where two rival gangsters each hire a master swordsman to fight in their impending gang war. One hires the meek, philosophical Zatoichi – much to the bemusement of his men – while the other hires the sick and worn-out samurai Hirate. The entire movies builds on a rising tension: we wait for the gang war to finally erupt, and we wait for the two master swordsmen to face one another in combat. Neither event disappoints.

While it’s an entertaining film overall, what’s particularly riveting is Shintaro himself. It was his definitive role, and even in this first adventure it’s clear why the films lasted for so long. He seems such an unlikely action hero: small, rounded, unassuming and light-hearted. When we first see him fight, in an ambush by two thugs in a forest, we expect to see a brilliant and elaborate display of swordfighting. Instead we see two blows, lightning-fast, and his opponents both drop dead to the ground. The contrast between Zatoichi the old masseuse and Zatoichi the ronin is masterfully handled.

Shigeru Amachi is also extremely convincing as Hirate: slowly dying of tuberculosis but desperate to go out on his feet with a sword in his hand. He and Zatoichi find themselves on opposing sides in a war in which neither is personally invested. Their mutual respect helps lift the film above the standard, by-the-numbers ‘chanbara’ flicks that populated Japanese cinemas at the time.
Posted by Grant at 9:10 PM