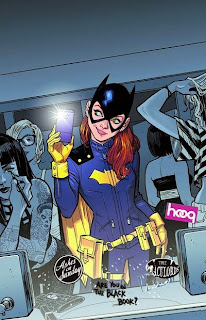 DC Comics launched five new monthly titles in October, as well as soft relaunches of two others - Batgirl and Catwoman. Altogether it marked the biggest push of new titles they've done in a long time, all of them promoted with a lot of in-house print advertisements and Internet hype in all the standard comic book websites. How did they go?
Batgirl introduced a new creative team and fresh direction, and this resulted in an 81 per cent jump from 34,590 units in August to 62,644 in October. DC promoted the hell out of this one, and it got a lot of traction among the comic websites. October sales were the best since February 2013. Catwoman also underwent a change in creatives and direction, but for some reason this one didn't get the marketing push DC put into Batgirl. The result? A very disappointing 11% bump from 23,497 in August to 25,970. That's still the best numbers for a regular issue in 2014, but it should have been a lot bigger.

October saw the Green Lantern books kick off a high-profile multi-book crossover, "Godhead", although while it's produced a sales bump it hasn't been as big as I suspect DC hoped. It's gained the books about 4,000 new readers across the board, with New Guardians and Red Lanterns still lurking beneath the 30k mark - and I suspect Sinestro will join them there within the next 2-3 months. I wouldn't be surprised to see a line-wide cancellation in late 2015, followed by fresh issues ones.

I like to keep track of the more recent books, so as with previous months let's check in and see how they're going: I'm interesting in any monthlies with six regular issues in the market or less.
So, all up, what books are sitting in the danger zone? Books coded 'orange' are selling between 20,000 and 30,000 copies a month, so there's a good chance DC is keeping a very close eye on them. Books coded 'red' are selling less than 20,000 copies and are in immediate risk of cancellation. Books coded 'black' are dead in the water with less than 10,000 copies shipped.