Star Trek: The Next Generation: "The Defector" 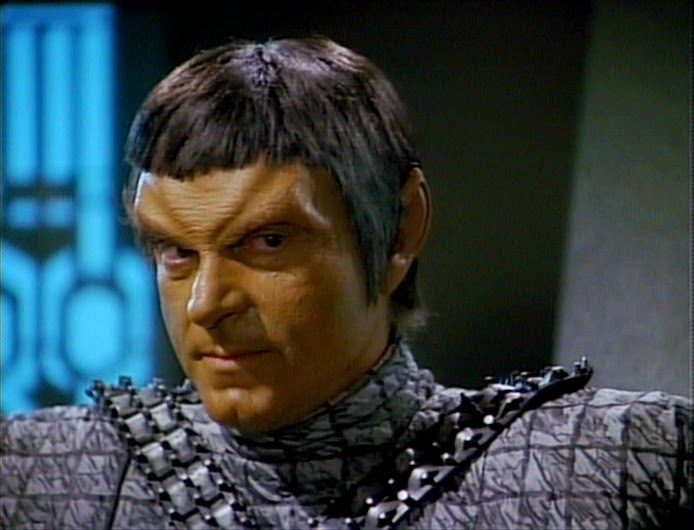 The Enterprise intercepts a rogue Romulan scout ship crossing the Neutral Zone. Its pilot is a low-ranking Romulan officer with information on a secret military base being established to threaten the Federation. He wants to defect - but is he telling the truth?

I have a soft spot for "The Defector", because it was the first episode of The Next Generation I saw in a really long time. I was a fairly obsessive viewer of the old VHS rental releases of Seasons 1 and 2, but then those releases dried up somewhere towards the end of the second season. It was about two years later than I managed to see this episode at a friend's place - they had been getting episodes mailed to them on tape from a fan in the USA. The episode seemed pretty amazing at the time, because it was the first I'd seen of the improved Season 3. Coming back to it now it's not quite as impressive, but it is still a highly enjoyable episode.

The episode follows quite sharply on the heels of "The Enemy", the last Romulan-centric episode, and dialogue wisely refers to the events of that episode. This is a pretty big deal: until this season The Next Generation really didn't refer to earlier episodes out of a worry it would make it harder for local TV stations to screen the episodes in syndication in future years. Referring to previous episodes would force the stations to broadcast re-runs in some kind of order, rather than in the more haphazard fashion they'd previously been screened. It's not the first episode to make reference to a preceding one - I think that would be "Q Who" - but it's the first one to reference a fairly minor, self-contained episode. It's good: it helps to build a more cohesive fictional universe.

James Sloyan portrays the defector in question: actually a Romulan admiral named Jarok masquerading as a less important officer. He plays the part with a marvellous sense of arrogance: he goads and insults Worf, he plays games with Picard, and loses his temper when Riker questions his motives. The episode draws out plenty of doubt over Jarok's true goal, and we don't get an answer as to whether or not he's a genuine defector until the episode's climax. Sloyan obviously made an impression of executive producer Rick Berman, because he got hired for another four guest performances in Star Trek after this.

Andreas Katsulas is back as Commander Tomalak, another link to "The Enemy". He's a lot more effective here, and is beginning to shape up as a potential returning antagonist. Frankly the series never quite commits to him as a character, despite appearing in another two episodes in Seasons 4 and 7. It's a shame.

Perhaps the episode's most unexpected highlight is its cold open (the bit before the opening titles), where Data performs a scene from Shakespeare's Henry V. He's coached by Picard, and plays the role of Henry in an attempt to better understand the human condition. Not only do lines from the play echo through the rest of the episode - it's on the nose, but sincere - but Patrick Stewart sneakily pulls double duty as both Picard and a holographic simulation of English soldier Michael Williams. He's buried under prosthetic make-up and affects a northern English accent, but there's no hiding him. The scene is an unexpected delight.